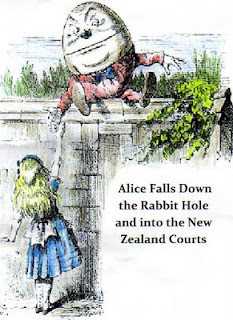 Here's the latest attempt to pervert the course of justice by the Masterton Police prosecutor Garry Wilson and his girlfriend Liz Harpleton, a registrar at the Masterton Court, and disgraced, corrupt bully, ex Constable Paul Dallinger, who was apparently sacked from the NZ Police recently - or abruptly perfed out of the force (resigned in exchange for a huge payout, known as 'perfing') when the investigation into his sadistic criminal activities was instigated: 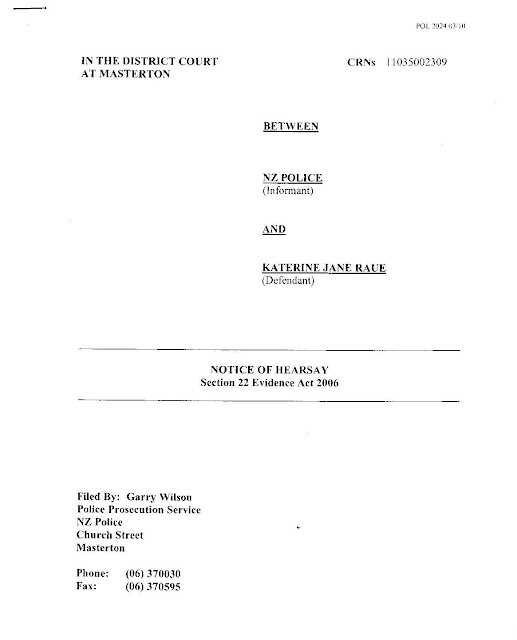 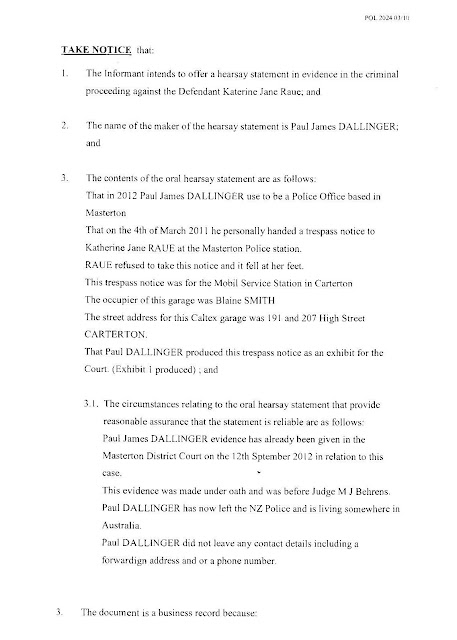 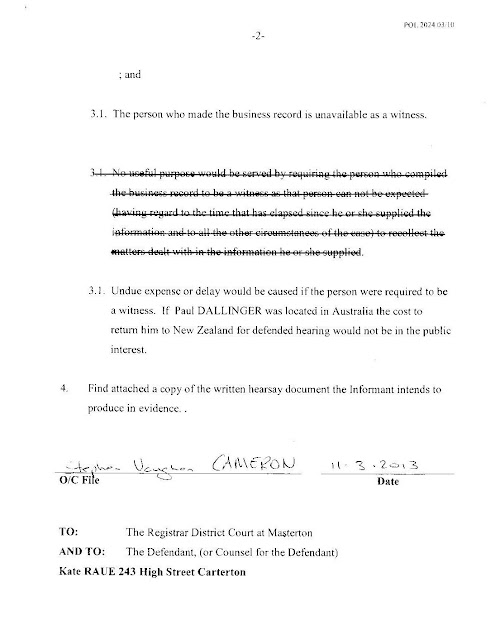 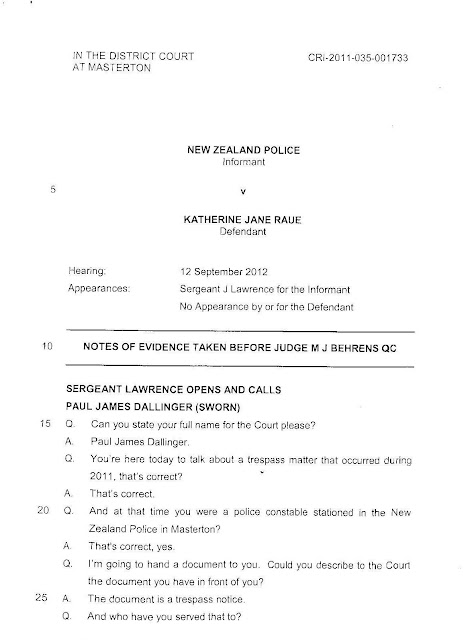 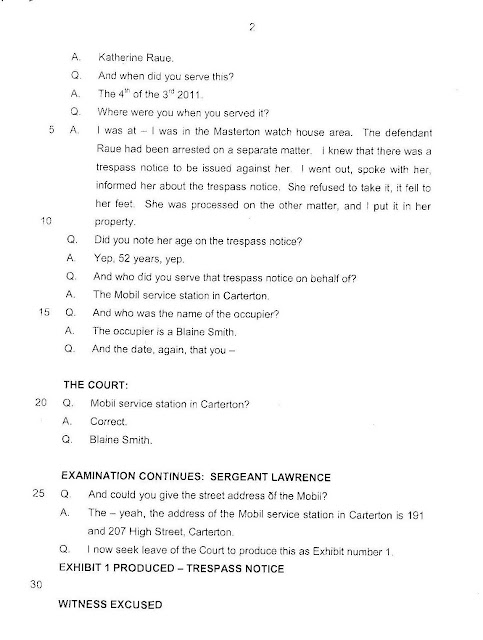 This was at the hearing which was adjourned after Police prosecutor Sgt Lawrence told Judge Hobbs she had a conflict at the formal proof hearing!  Sgt Lawrence had a conflict on the 16th of July but suddenly she didn't have a conflict on 12th September?  This will never stand up to cross examination - just like Paul Dallinger's 'evidence' will never stand up to cross examination - because he'll be asked about his sadistic and violent vendetta against me - about how he kicked in the door of a fourteen year old girl to handcuff me and wrestle me to the ground and waste the time of the Court, and the taxpayers, after he and Constable Harvey Pope leapt into action after this vague phone call from a person who made it perfectly clear that he didn't want to make a complaint:


Ex Constable Paul Dallinger and Constable Harvey Pope used this pathetic excuse to assault me, take the bicycle without permission or authority, and then smash in a fourteen year old girl's bedroom door, assault me again, lock me in Police cells for hours subjected to cruel and humiliating treatment as described by a number of lawyers.  The caller (pictured above with one of the malicious instigators of this nasty vendetta, Kirsten Grenfell of Barnardos) made it perfectly clear he didn't want to pursue the matter!  Constable's Pope and Dallinger had NO authority to assault me or take the bicycle whatsoever - let alone kick in the door and "arrest" me! 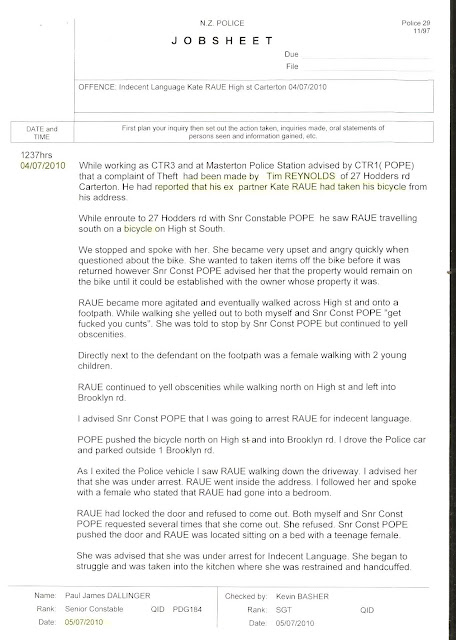 This is more evidence that local people do not support the actions of local Police - who tried to get the witness to support them - this is outrageous - the witness told them that she'd heard me tell them the bike wasn't stolen, and that I'd been riding it for months with the full permission of the owner to whom I'd be returning it shortly - Pope and Dallinger had no authority to take the bike at all and that's what I told them and that's what the witness heard.  And even if there HAD been a complaint - which there WASN'T - it was no excuse for the way they behaved - kicking in a young girl's bedroom door because I allegedly swore at them?  Outrageous violence, and out of all proportion to the alleged offence, and clear evidence of their sadistic and violent behaviour!  Here's another statement from the person who Dallinger claimed gave them permission to smash the door in - this statement was made regarding another incident when they did the same thing after they came screaming into the driveway with sirens and lights going because they'd seen me without a bike helmet on - these people are still waiting for Police to pay for the damage they did to the door and they did NOT give permission at all, and neither did I give permission for them to take the bike - which was NOT stolen! 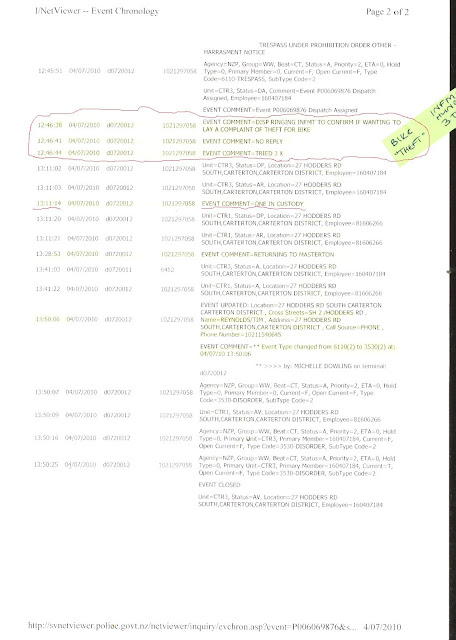 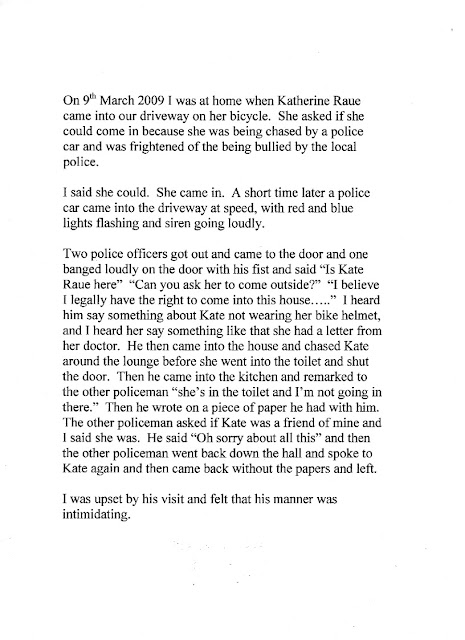 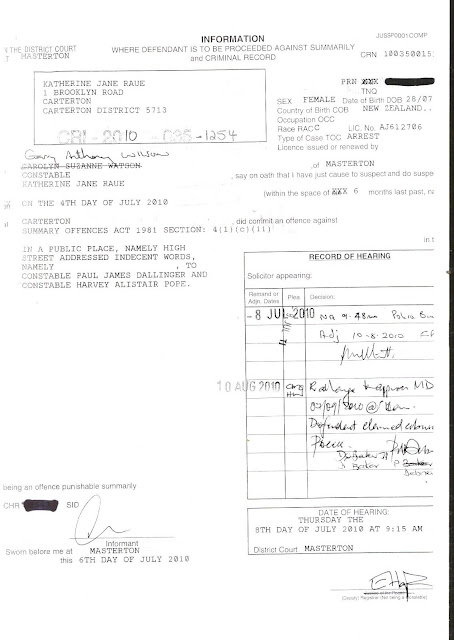 Local Police are violent thugs, who kick in bedroom doors to "arrest", handcuff and assault the victims of domestic violence and other bullying in this community - and then slander them to their employers, while they cover up the actions of dangerous recidivist violent offenders and serial child abusers.


Posted by Transparency in New Zealand, Kiwileaks. at Saturday, March 23, 2013