Joshua Ufer's mum has worked tirelessly to make working conditions safer for all in the mining industry, in Australia, New Zealand and around the world, following the death of her only son Joshua, aaged just 25 years old when he was killed in the Pike River mine explosions, after a litany of criminal negligence and failure by the corporations running the mine and the government agencies who should have ensured that the mine was shut down long before the day it exploded, killing Joshua and twenty eight other working men, family men, dearly loved men.

Joanne Ufer has written the following open letter to the Australian mining industry - it should be mandatory reading in a range of New Zealand industries and framed and hung on the wall in every smoko room and workplace, and every office of what used to be called the Department of Labour (now known as the MoBIE dicks) - particularly our forestry industry.  Joanne's approach is a holistic one, and while it's not heavy on sentiment, focusing on constructive action, this letter touches deep into the heart of any parent, any wife or partner, any mother, grandmother, and any bereaved child, it's profoundly moving, and deserves to be published far and wide in my humble opinion, and re-read often.


To all in the Australian mining industry,

It has been with a heavy heart that I have watched the news over the past two weeks. Four fatalities in the industry in nine days, Western Australia, New South Wales, with the most recent the two fatalities at Mt Lyell in Tasmania on Monday.

This brings the total fatalities in Australia’s mining sector to six in 2013.

Firstly may I say that my thoughts and condolences go out to all the families, friends and colleagues affected by these tragic and what would appear to be totally avoidable deaths.

I know all too well the feeling of hopelessness, despair and grief associated with losing a loved one in a mining accident. I have been there and I am deeply saddened that it still appears that the lessons of the past, the lessons given by all those who have given the ultimate sacrifice are not being taken note of.

My son died in an underground coal mine disaster but the environment doesn’t really matter.
In any sector of the mining industry, coal or metalliferous, underground or open cut - it is a risky business.

Many of us get up, go to work, do our day’s toil and go home with little thought to the enormity of that risk.

I myself did not for one minute ever think that there was the chance that my son would go to work one day and that would be it, I would never speak to him, or see him or hold him ever again but that is the reality for me and for all those who have suffered the same loss, parents, partners, children and friends.

While this time of year brings with it much joy, it is also a time that brings added stresses to many.
Allocating time to spend with all the family, spending too much money, not having enough money, going on holidays, not getting holidays approved, the fatigue that comes with the additional socialising inherent with the festive season.

For the companies, it means pressure to reach end of year targets, ensuring staffing levels are adequate when employees may be throwing the odd sickie.  I have worked in the industry myself and witnessed first-hand the pressures that are felt from all sides.

A lot of people may say: ‘it won’t ever happen to me’. But do you know what?

It can and does happen to ordinary people.  My son said not long before his death that he would be around forever and sadly that was not so. I am now looking at spending my third Christmas without him being a part of it, and it does not get any easier.

My little grand-daughter never got to spend one Christmas with her Daddy, she was born six months after he died.

Can you imagine never seeing the joy on your children’s faces on Christmas morning?

As a parent can you imagine never seeing your child’s face ever again, it is still something even after three years I find hard to comprehend.

So I plead with you all please, please remain vigilant.

Look out for the signs that things may not be all right.

Watch yourself and have your mate’s back.

Don’t be afraid to say something if you feel your safety is being compromised.

Remember too that safety doesn’t begin the moment you clock on.

As soon as you step foot out of your home, or your camp, it begins.

Don’t let your family face Christmas and New Year without you.

Stay safe over the festive season and always. 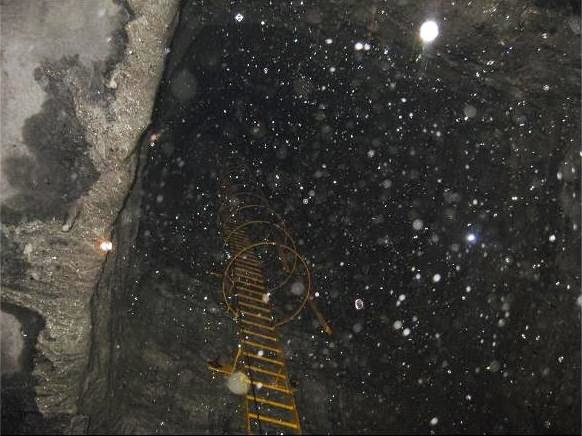 This is the ladder that the corporate Scrooges deemed adequate for Joshua and his workmates to escape from the mine in an emergency - workmates like Joseph Dunbar - killed on his first day of work, aged just seventeen years and one day - this ladder was NOT fit for the purpose and management KNEW that and so did the Department of Labour and the Union!  Indisputable evidence was given at the commission of inquiry that the ladder was NOT fit for the purpose!

There is more information at these links about the Pike River mine, including a link to the Trust fund set up for the families of the miners, to provide for their children.  Please spare a thought for these families, now facing their third Christmas without their loved ones, their sons, brothers, husbands, fathers and friends, used as a pawn by this government, the innocent victims of corporate greed and systemic government failure, incompetence and corruption.
Posted by Transparency in New Zealand, Kiwileaks. at Wednesday, December 11, 2013 No comments: