Application for recall of decision - Minute of Kos P November 2016:

In late October 2016 Dun Mihaka's Maori Agent applied for a recall of the decision of France J on the grounds that fresh evidence has become available and there was indisputable evidence of a substantial miscarriage of justice:

"We wish to urgently apply for recall of the decision of the Court of Appeal on the grounds that fresh evidence has recently been obtained which is evidence that a substantial miscarriage of justice has occurred, and it has been confirmed that Mr Mihaka never received any Disclosure according to the Criminal Disclosure Act.
Judge Hastings recommended an amicus be appointed but the trial Judge (Kelly) decided not to do so - Mr Mihaka was a self represented litigant forced to represent himself because he couldn't afford to pay back a legal aid loan for something he was innocent of, he conducted his hearing in Te Reo, he was NOT properly warned of the consequences of giving evidence himself, or the fact that he didn't need to and at the end of the case for the prosecution the Judge should have realised that the evidence given on oath did not stack up against the Summary of Facts or the complainant's statement to Police, which are both attached.  The only agreed fact is that the complainant inappropriately touched Mr Mihaka while Mr Mihaka was asleep - twice according to the information provided by Police recently.
Judge Kelly shut Mr Mihaka down repeatedly as he tried to cross examine the prosecution witnesses and this was recognised by France J in his decision - if he had been allowed to cross examine adequately and provided with Disclosure these discrepancies might have been addressed!

I refer to paragraph 5 of this decision which states that the alleged incident occurred in the morning just after the complainant woke up and made coffee as described in the first four lines of para 5.  Attached is the statement of the complainant to Police and the Police Summary of Facts, both of which directly contradict the assertion in para 5 of the decision.  Both these documents state that the alleged incident occured at night as the complainant was going to bed - not in the morning when he got up - and on two different dates - as well as the date in the Police officer's notebook which is different again!
There is strong evidence of collusion between Housing New Zealand Corporation and Police regarding this matter, which is also currently before the Human Rights Review Tribunal, who have recently suggested sending it back to the District Court, and Mr Mihaka's lawyer has written to Police regarding defamation and slander after Housing New Zealand Corporation claims that they received information from Police regarding this matter which led them to evict Mr Mihaka - it is clear that the source of information was the complainant, not Police, and Police now DENY HNZC's claims - it is indisputable from an examination of the attached documents that this conviction is unsound, and that if Mr Mihaka had been provided with Disclosure as he was entitled, and properly warned about the consequences of giving evidence himself, he would have been in a position to cross examine the complainant effectively during the case for the prosecution, and ask for the charge to be dismissed prior to presenting ANY defence!
Finally, Maori have a tradition of oral information, not written, and we request the opportunity to present our case in person, orally, to the Court.  Mr Mihaka is seventy five years old and not able to write his entire claim down and we should not have to - both appeal lawyers should have realised that he had never received the Disclosure, and the discrepancies therein should have been addressed at the earlier appeals!  Both Mr Mihaka and I have very limited resources available to us, adding further difficulties to the requirement that we put our entire case in writing - this matter is currently before the HRRT and is URGENT.  We respectfully request a hearing, and a recall of this decision - France J was unaware of these documents and so was Mr Mihaka.
Katherine Raue
Maori Agent for Te Ringa Mangu Mihaka."

We recently received the Minute of Kos P of the Court of Appeal. 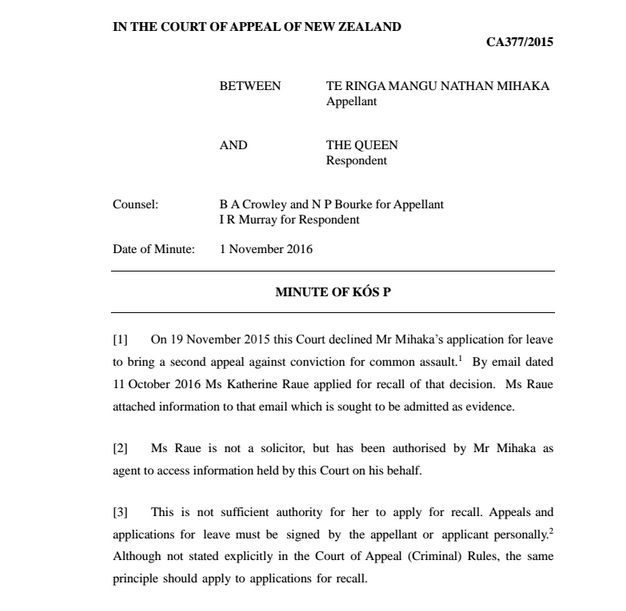 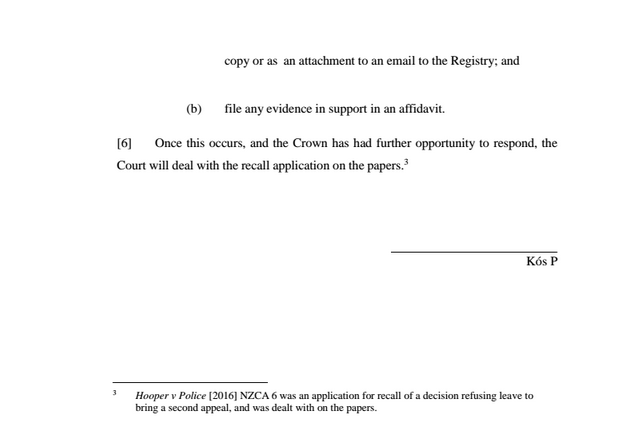 Posted by Transparency in New Zealand, Kiwileaks. at Monday, November 14, 2016 No comments: