I have documented the manner in which the matter has been dealt with to evidence the dysfunction, which continues,almost eight years later.

It all started when I received this letter from the Board: 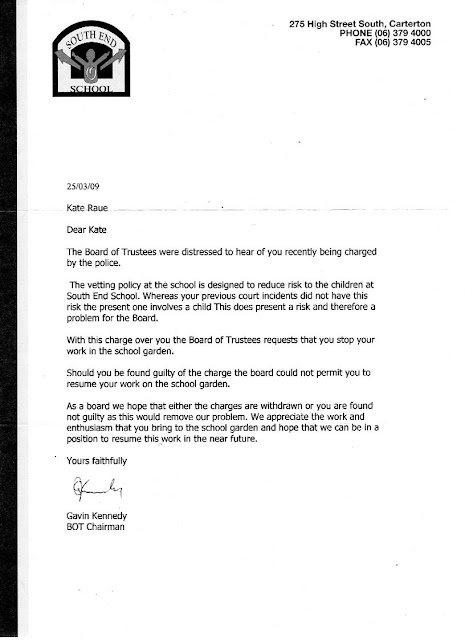 I have never been charged with an offence involving a child in my life, I had informed the Deputy Principal, referred to as "Dallas" in the emails below, of that fact several weeks prior to receivig the letter, and informed the school of that immediately on receipt of the letter.

The Board insisted that the NZ Police had informed them that I had been charged by Police with an offence involving a child, which is blatantly untrue, it is a complete lie. 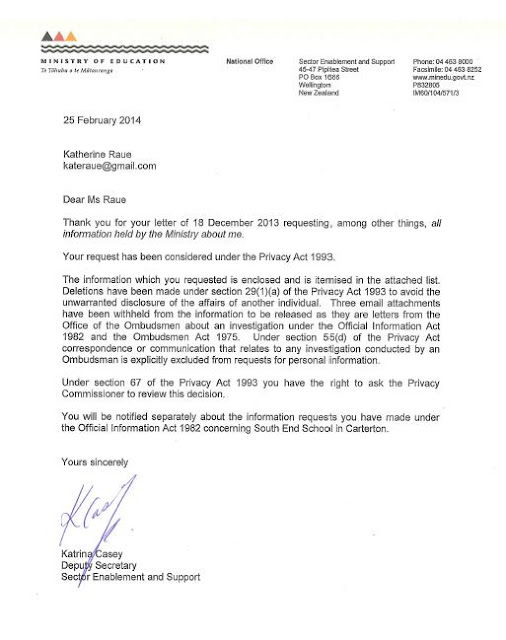 
I am writing to again to request a meeting with the Board of Trustees and the IPCA regarding the orchestrated litany of lies being spread throughout the community, Courts, Privacy Commissioner's office, and far and wide, regarding me, by local police and their  mates - better work stories indeed!  I refer to a letter from the Board of Trustees of the South End School sacking me from my job at the school

School secretary Elaine Scully and statutory manager Ken Wilson then sent the following emails - Scully is a liar - I DID have a job at the school, as evidenced by the letter from the Board, and correspondence from the Minister of Education Louise Upston, and as can be seen from my email, I did not call her ANY names under the sun - her allegations of abuse are LIES.  Like her allegations to police that I stole correspondence between the school and another sacked staff member from the letterbox of a Board member - Scully gave it to the wrong child to take home to mummy!  Elaine Scully is the main problem at the South End school, she is a liability, she should have been sacked long ago! 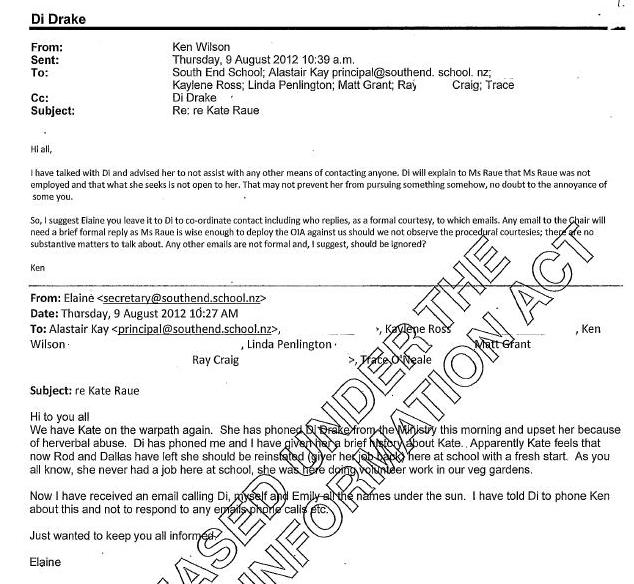 The Privacy Commissioner's tax payer funded 'investigator' Dawn Swan proved to be nothing but an overpaid liar, she insisted that I must have told the Board that I had recently been charged by Police with an offence involving a child, which defies belief.

I complained to the Ombudsmen.  They backed the Privacy Commissioner initially.

Local politician Kelvyn Alp then wrote to the Ombudsmen demanding that they reopen their so called investigation as it was clearly flawed.

The Ombudsmen capitulated and reopened the investigation, this time deciding that the Board had acquired the defamatory gossip on which they based their letter to me "via a local kindergarten" and other ridiculous statements which will never stand up in a Court of law in any way shape or form

This letter says that the Ministry has conferred with the Board of Trustees, and they have confirmed that they would consider my latest correspondence under its formal complaints procedure at its meeting on 15 February and then communicate back to me.  It's now nearing the end of April, two months later and there has been no communication, as usual. 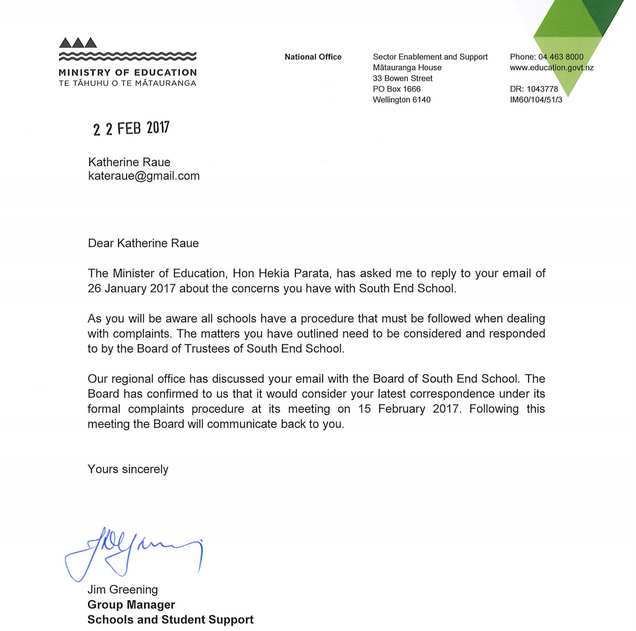 What makes the Ministry's response even more ridiculous is the fact that it is evident from a notice published in the Gazette that a Statutory Manager was appointed on 26 January 2017.  It can be seen from the notice that the Board would be acting ultra vires in considering my concerns, they should be dealt with by the Statutory Manager.

This is the second time in recent years that a Statutory Manager has been appointed to run the school, the first being Ken Wilson, author of the email above - another overpaid civil servant who should be charged with perverting the course of justice and failing in his fiduciary duties. 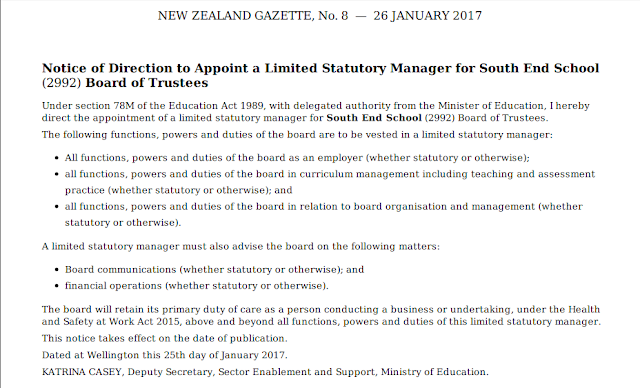 This is the second time the Board have done this, they sacked another staff member while the previous Statutory Manager was supposed to be in control.


"In respect of complaining about the IPCA, there is no process I know of short of the High Court in litigation.

However a new Authority is about to be appointed Sir David Carruthers previously Parole Board Chairperson, and before that Chief District Court Judge.  (sic)

You could complain to him that his staff have not done their job, as a new broom he might be interested.

Other matters
Given . . .  changes in Legal Aid funding I should advise you I am not going to be able to take your case on legal aid.

I have been doing criminal legal aid files for some time, but with the introduction of fixed fees and the associated administrative burden now required for legal aid, in order to make a living I am forced to reduce the amount of legal aid cases I can do.
Partly as  result of this tightening in the year ended March 2011 , i.e. 12 months ago and that I had my worst year ever earning less than the average wage, $50,000, as a result I have been forced me to reconsider the number of cases on legal aid I can take.

In the civil area, where your case falls, the paperwork required from the Legal Services Agency is onerous.

I regret given the time delay and still not having all your files,  and the new legal aid regime that trying to take on your case requires more time than I have.
Regrettably the payment offered form civil legal aid (which you of course are likely to be required to repay) does not provide a fair reward for work done.
Whilst I do not like to reduce the decision to a financial one, I regret having to be more selective in taking legal aid cases, and have turned down 10 in the last month, your potential case is not even ready to be considered and in addition to financial considerations I regret I don't have the time.

I will return your files.


I wrote to several members of parliament about this matter, hardly any bothered to even reply, Andrew Little's pathetic response is below: 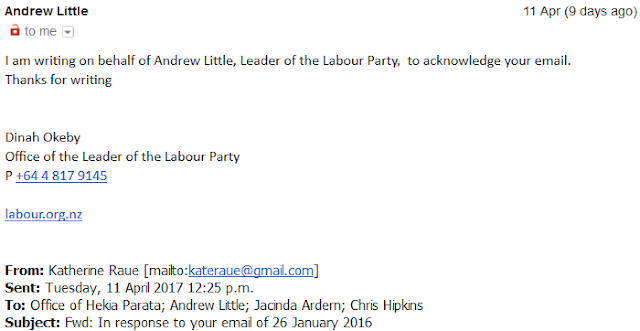 Posted by Transparency in New Zealand, Kiwileaks. at Thursday, April 20, 2017