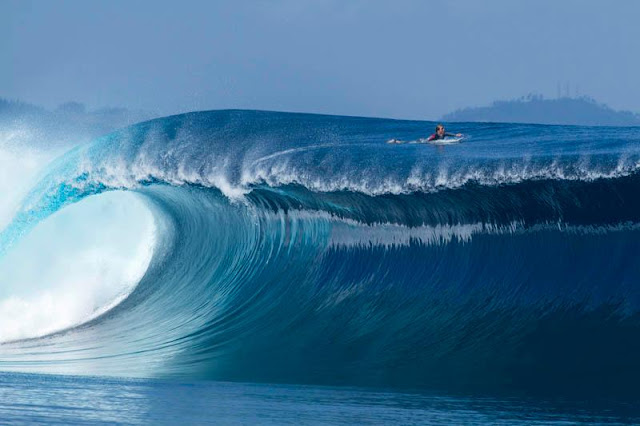 This is how my brother David loved to live his life (above).

This is how he died (below).

The story of his death is deeply disturbing. It can be seen from the documents below that police simply accepted the word of a woman called Tessa Knowles, who used to go out with him until 3 or 4 months before he died, who told them he had overdosed on drugs, had HIV (which he did not, this appears to be a ruse to prevent police examining his body too closely) and allegedly committed suicide.  It's incredible to see how the police simply accepted what she told them without question, until it was too late and all the evidence had been destroyed.

After I obtained the file on his death from the police I noticed a couple of things.  Firstly, despite the initial pages of the file listing the subject as "Suicide", it changed to "Suspicious death" and later "Unexplained death" after I started asking questions.  If I hadn't, it would still be generally accepted that my beloved brother committed suicide by drug overdose, which he didn't.  Despite the insistence of Dave's ex-girlfriend Tessa Knowles that it was a drug overdose, the post mortem report showed there were no drugs in his body apart from the proper dose of a prescription medicine he was on at the time, and he certainly didn't overdose on anything.

The documents (and other evidence, which will be put up soon) show there were no drugs present in his body, and no evidence whatsoever of drug overdose OR suicide.  This woman tells police that he was a hard drug user, but he wasn't.  She was.  Tessa Knowles has a very well documented history of serious drug abuse.  She told them he was likely to have herpes and HIV, etc which he didn't, in an apparent attempt to discourage investigators from examining the body too much.  It worked, his clothing, etc, was destroyed on the strength of her lies about him having HIV, with no attempt made apparently to see if this slanderous claim was true or not.

Click on the images below to enlarge them, the final document is the police report documenting how the pathologist tells the police "I am not prepared to say that this man died of unascertainable natural causes because he didn't."  And the notes of the ambulance officers who said "We thought this death was a bit odd because the girlfriend was so cool, calm, and collected while we were there but went into being hysterical when the police arrived."  Before going on to suggest the possible scenario that had occurred to them at the time.

This theory was supported by the fact that I noticed as soon as I read the post mortem report that there was a needle mark on each inner elbow.  Ambulance officers confirmed that they had only put a needle into one arm, which left the second needle mark unexplained.

After further communication with the pathologist he responded "I am still a bit uneasy about this one - it's possible he may have been injected with a biological substance such as insulin, which would not show up in the ESR tests.  I would suggest that someone has another chat to the girlfriend to see if she changes her story." 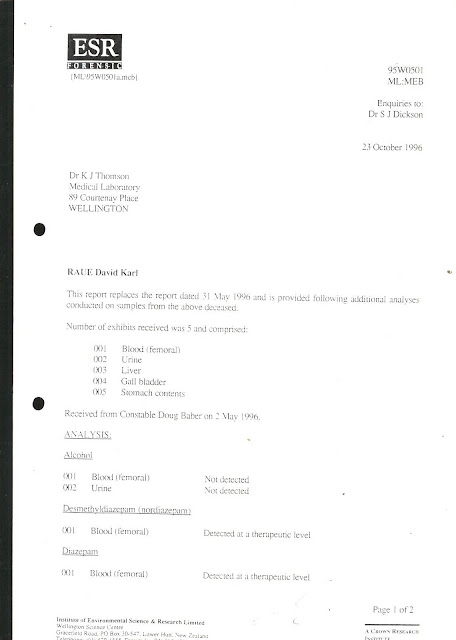 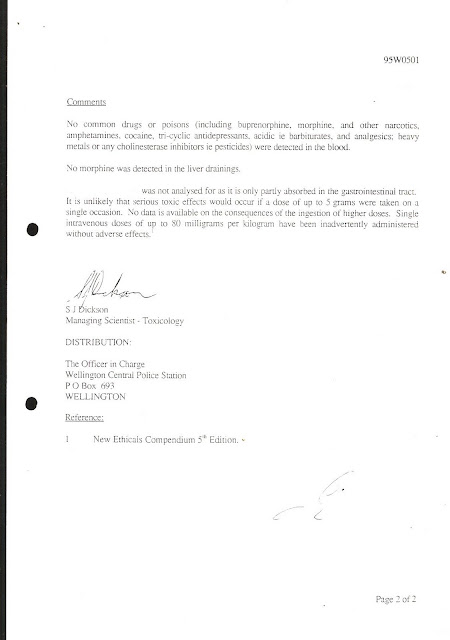 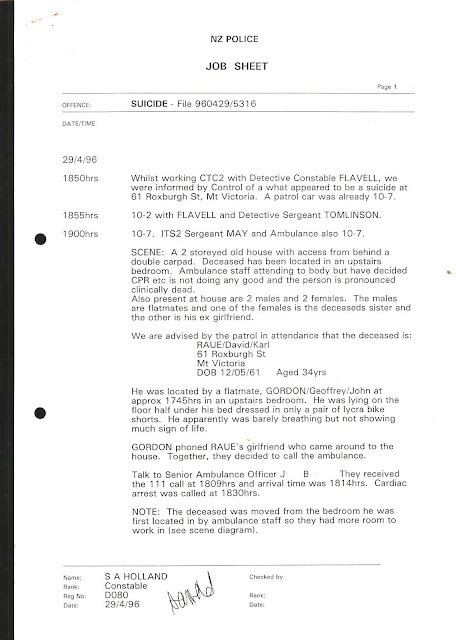 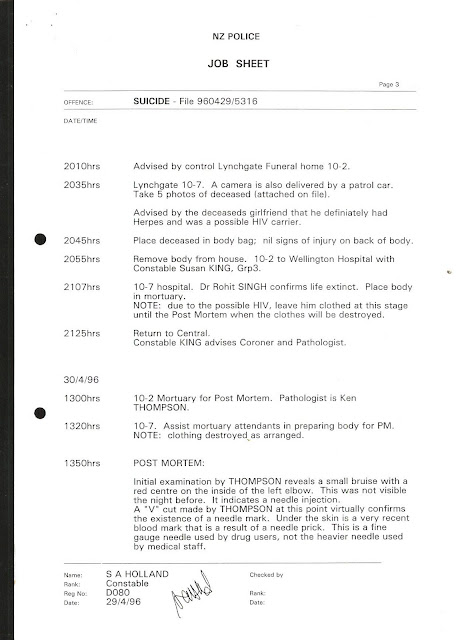 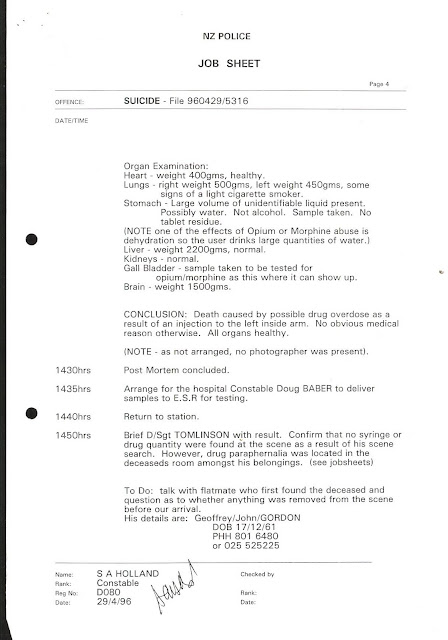 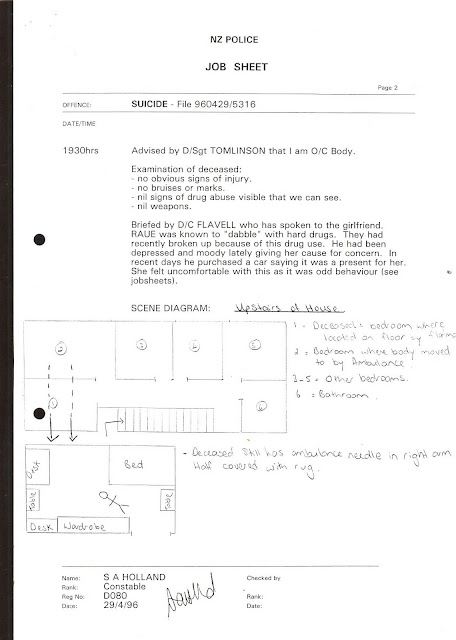 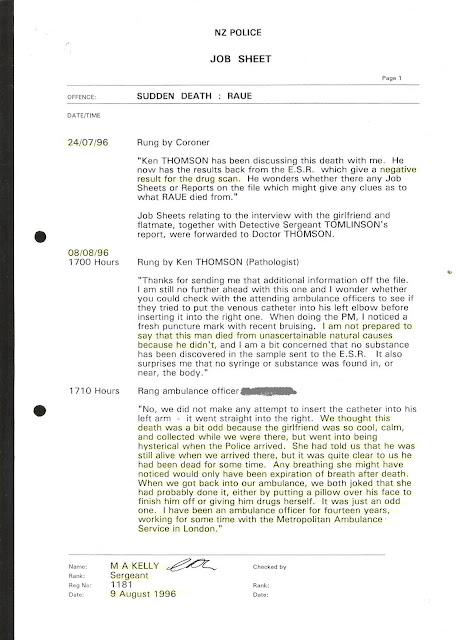 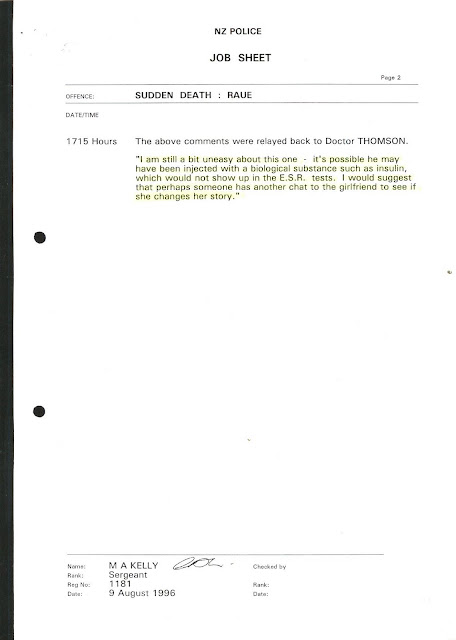 How often does this happen?  Detective Tomlinson at least had the decency to admit his mistake honestly as soon as he became aware of it, and try his best to find out what really happened as soon as he became aware of the errors, after I contacted him.  I will always be very grateful to Detective Inspector Harry Quinn also, without whose assistance evidence regarding this miscarriage of justice involving my brother would never have come to light.  Harry Quinn has always been a great asset to the New Zealand Police, and I only wish there were more officers with his common sense and integrity.  I wish him happiness and good health in his retirement, and am grateful for his fair treatment of me and my family over many, many years.

Det Sgt Tomlinson reinterviewed the ex girlfriend and the flatmate several times, but by the time he realised it wasn't as he'd been led to believe, it was too late.  The statements of their interviews are damning to say the least, This post may be updated  in the future, and the witness statements and more information added.  Tessa Knowles accuses a number of individuals of injecting David with drugs, I'm sure they'd like to know who they are and what Tessa has to say about them - seeing as she's basically accusing them of manslaughter or murder . . .

My brother didn't commit suicide, and he didn't die of an accidental, or self administered, drug overdose, it appears very likely that he was deliberately injected with something like insulin, or that someone was involved in interfering with evidence, because none was found at the scene.   The police are now fairly sure that someone else was involved in causing his death, which is why they interviewed Tessa Knowles and Geoffrey John Gordon so many times, the actions of both of those people were very suspicious indeed - why did Geoff Gordon not call an ambulance when he discovered Dave's body, instead of calling Tessa Knowles - whose relationship with my brother had ended months before?  Tessa Knowles and Geoff Gordon were both heavy drug users, both had extensive experience using intravenous illegal drugs, and both conspired to conceal evidence about how David Raue died.  It appears they may have got away with murder.

How often does this happen?  How often do people accept the word of murderers that a death was by suicide?  If Knowles and Gordon were innocent they would have called an ambulance immediately.
Posted by Transparency in New Zealand, Kiwileaks. at Saturday, February 24, 2001 No comments: