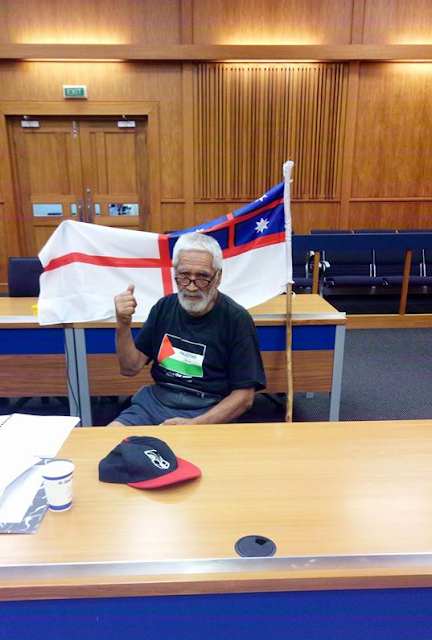 A recent decision of public interest, in the District Court at Wellington, September 2017, regarding seating arrangements in the Court.  In particular, seating arrangements regarding Police officers.  This decision has serious implications - it is clear that the colonial Courts have been conspiring with Police to a significant degree by condoning what many people know to be a widespread practice of allowing Police to sit where they like, and also to sit in Court listening to other witnesses give evidence before they take the stand and give their own evidence, another seriously prejudicial practise that is widespread.

EDITORIAL NOTE: CHANGES MADE TO THIS JUDGMENT APPEAR IN
[SQUARE BRACKETS].

IN THE DISTRICT COURT
AT WELLINGTON

Date of Ruling: 7 September 2017
Appearances: E Light with C Hislop for the Crown
C Stevenson for the Defendant

RULING 2 OF JUDGE A I M TOMPKINS

[1] At the commencement of what is likely to be the final day in this trial,
Mr Stevenson, appearing for the defendant, has raised an issue concerning the
disposition of persons within the courtroom, and specifically the presence at a table to
the side of the courtroom on the opposite side from the jury, and slightly in front of
the dock, of the officer in charge.

[2] Mr Stevenson submits that in the interests of overall fairness, and the officer
in charge’s formal role in the trial now having ceased, the officer in charge should not
remain seated at the table in case the jury are left with the impression, perhaps
intangible but, nevertheless, potentially real, that the officer in charge in particular,

and the police in general, retain a role in the trial process elevated above that of any
other witness who has completed their evidence but who is entitled to remain in the
public gallery in the Court.

[4] This is a matter that I have not encountered before. Indeed, it is, in my personal
experience, apparent that throughout the country, different seating arrangements and
configurations are adopted, not only for the officer in charge but also, indeed, for the
defendant, who in some courtrooms remains in the dock throughout the trial, as is the
case in Wellington, but in other courtrooms in other centres, following arraignment,
moves to a table in the body of the Court, normally immediately behind defence
counsel.

[5] Mr Stevenson advises that although this issue is a matter of discussion and
debate within the defence bar, as far as he and, I assume, Ms Light is concerned, there
is no available ruling to serve as a precedent to guide the Court as to the
appropriateness or otherwise of various available and alternative seating
configurations in the courtroom.

[6] In the end, it must come down in those circumstances to overall fairness, being
both fairness to the defendant but also, as Judges routinely tell juries, fairness to the
community, represented here by the Crown.

[7] In those circumstances, I am minded to accede to Mr Stevenson’s request,
given that in the absence of any statutory guide or, indeed, any precedent or prior
relevant ruling, and if the matter is finely balanced and one of intangible and potential
impression only then in the end, the Court should err on the side of ensuring that the
defendant receives a fair trial.
[8] In those circumstances, I will request, when the jury returns to hear closing
addresses today, that the officer in charge move to the public gallery. And I will, as
endorsed by both counsel, mention that in passing to the jury.

A I M Tompkins
District Court Judge
Posted by Transparency in New Zealand, Kiwileaks. at Tuesday, September 12, 2017 No comments: