The latest installment of the indisputable documented evidence of the large scale tax payer funded corruption evidence in Carterton and the wider Wairarapa.  It is in the public interest to publish this evidence and in the interests of justice:

Lo and behold - the latest orchestrated litany of lies from the corrupt Wairarapa Police!

- Sgt Taplin refers to letters from well respected lawyer Ken Daniels which are at this link,  which include the following:

There have been numerous items of correspondence written between Kate Raue and yourself and correspondence with the Police Complaints Authority over a number of issues that she has raised in recent times.

I must confess that I have not given what I believe was sufficient attention to some of the matters that Kate Raue had raised with me in the past mainly I suspect because the matters appeared to be far too complex and involved and I tended not to see any relevance in some of the complaints that she was making.

On a recent visit to me however and after spending some time looking at documentary evidence that she showed me, I largely changed my view and believe that there genuinely are matters of concern that do need to be investigated.

I have not got to the bottom of all the matters Kate Raue complains about but there is one instance that does seem to suggest that there has been fraud at the Carterton Community Centre which has diverted funds designed for one purpose deliberately to another.

I enclose with this letter a copy of the accounts which appear to represent income and expenditure from the Carterton Community Centre for the financial year 01 April 2000 to 31 March 2001 as they related to the Community Gardens. You will notice how in the income received, there was a sum of $9,000 received from the Tindall Foundation. It is assumed that this money was received following an application for a grant from that Charitable Foundation. The monies would have been requested and received for purposes relating to the Community Gardens in Carterton. The sum of $9,000 was received in April of 2000.

If the above set of circumstances is accurate then there is no doubt whatsoever that there was a fraudulent use of the monies received from the Tindall Foundation. There had been no budgeted allowance made for personal grievances. This can be seen from the budget column in the expenditure part of the accounts where an amount of only $220 was allowed for the twelve months involved. A payment of $6000 was needed and this was paid directly from the charitable donation.

I believe that the affairs of the Carterton Community Centre are in disarray. There is currently an application before the High Court to have them wound up because of insufficient numbers. There are numerous other complaints as well about the way in which members of the public including members were excluded from meetings etc. This letter does not purport to address all those issues but I am deeply concerned after having seen the information supplied to me by Kate Raue that monies received for one purpose be used for an incorrect purpose.

I have been advised that a similar improper payment may have been made in respect of the account that was run for the disadvantaged members of the community. This apparently exists under the copy of the account also enclosed which is headed up VOSP 2000 – 2001. You will see also that there is a “miscellaneous” payment of $1,000.00 made in September of 2000 following receipt of a substantial amount fromWINZ funding. It is understood that this also was a payment to an individual who claimed to have a personal grievance.

I am not an accountant (as will be obvious) but I believe there are sufficient genuine concerns raised here to warrant some investigation. These are community funds which were largely received from charitable donations which appear to have been siphoned off improperly.
I should add that according to Kate Raue there was possibly legal advice given to the people running the Carterton Community Centre that they should not make personal greivance payments in the way that they did. This is another matter that may need to be looked into because it would make the payments even less appropriate if they were done contrary to legal advice.

I appreciate the fact that earlier complaints may have been thought to be ill-founded or frivolous or for whatever reason were not properly investigated but I believe that there actually does exist hard evidence to suggest that a reopening of the investigation should be made with urgency. As I have said the Community Centre and its funds are currently subject to a High Court Application.

If it is more convenient for you to do so I would be happy to act as a go-between between yourselves and Kate Raue so that I can request further details from her.
Are you able to assist with what I believe is now a genuine complaint?
Yours faithfully
Ken Daniels 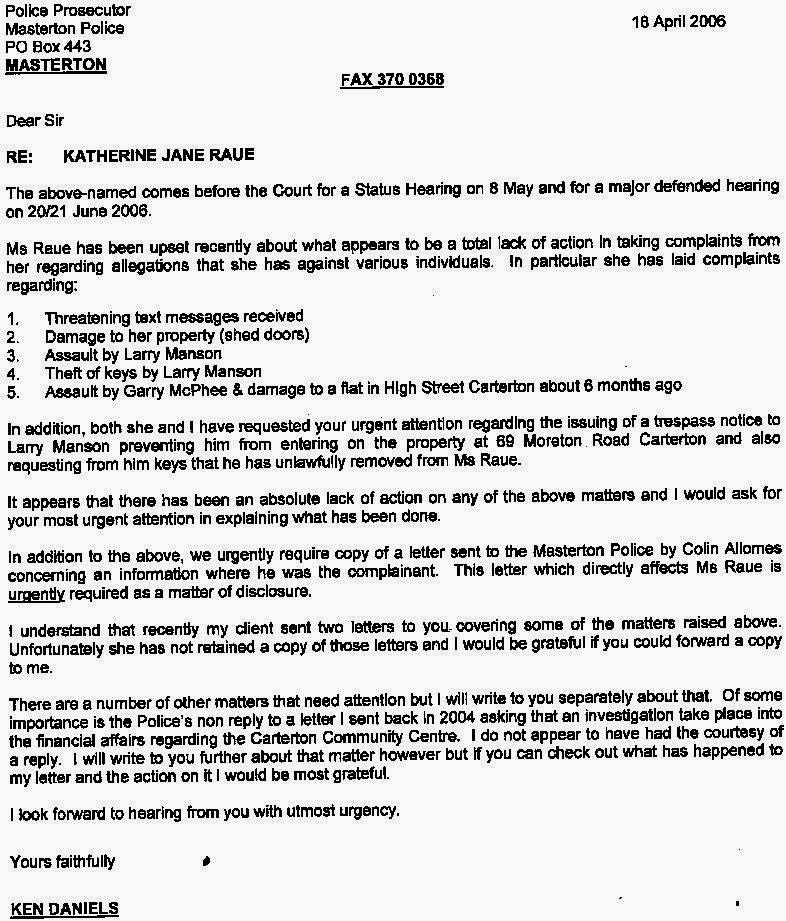 There are also a number of other formal complaints regarding these matters, such as the letters to the Police and IPCA from Michael Appleby.

The only response from the Police has been a contemptuous insult to the intelligence! 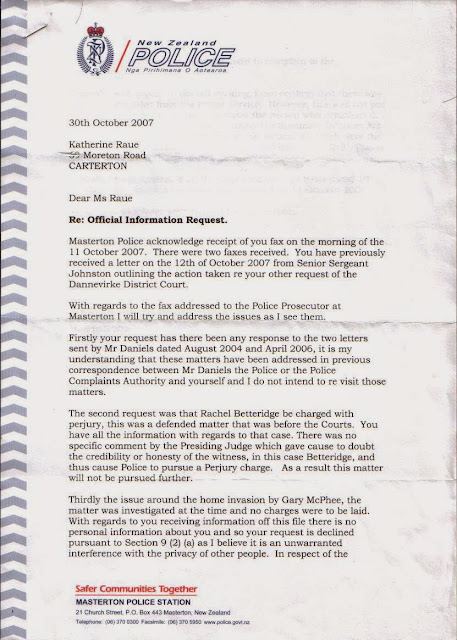 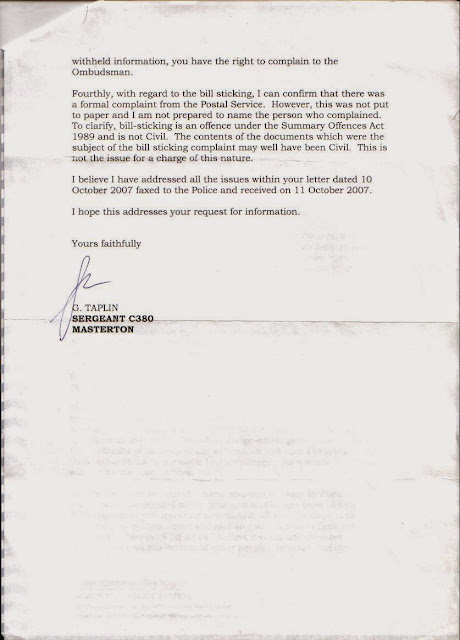 Posted by Transparency in New Zealand, Kiwileaks. at Tuesday, October 30, 2007 No comments: