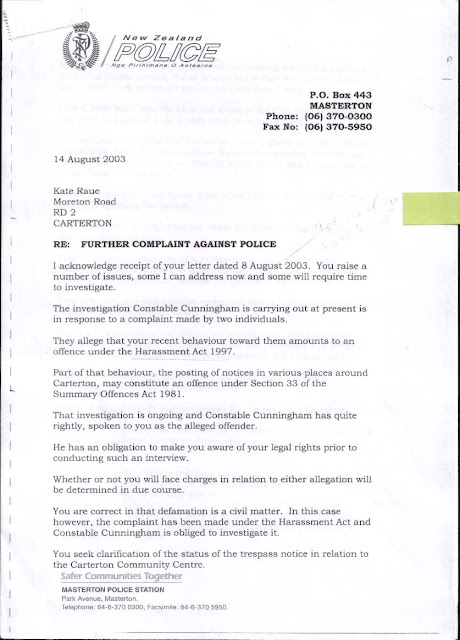 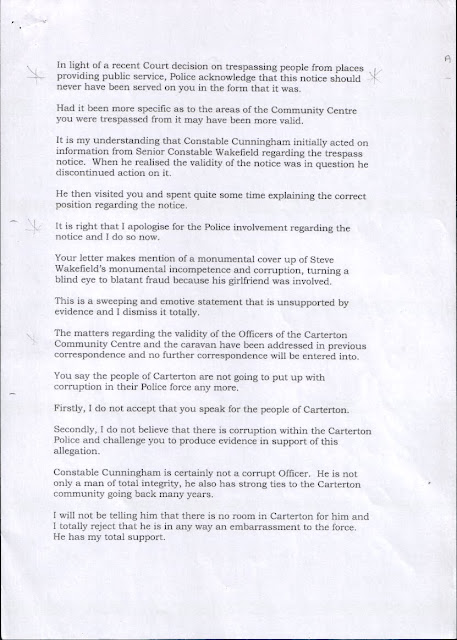 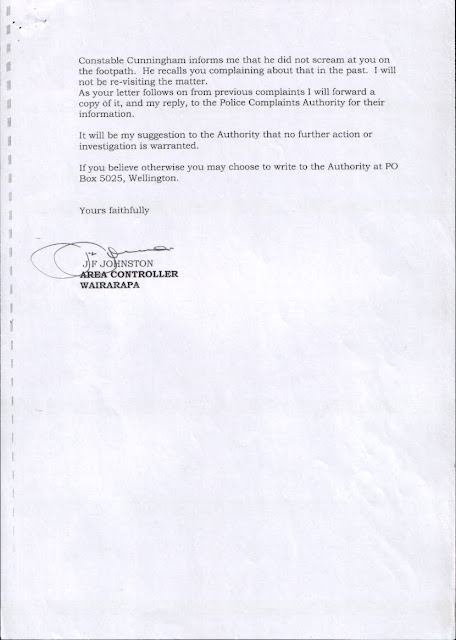 The letter above waffles on making excuses for Constable Cunningham's harassment of me regarding the "Billsticking" charge. The Police charged me with putting up notices to advertise a public meeting to discuss the illegal takeover mismanagement and closure of the Carterton Community Centre. These notices said "You are invited to a public meeting to discuss the mismanagement and illegal takeover of the Carterton Community Centre" and the date and time of the meeting. Hardly a criminal act warranting the intervention of the police - not for billsticking that's for sure - investigation of the fraud and mismanagement by all means. The allegation that these notices might in any way constitute "harassment" is ridiculous - and corrupt!

Then, on page 2, the letter admits that the trespass notice used to prevent me from attending meetings of the Carterton Community Centre since 2001 was never legal. 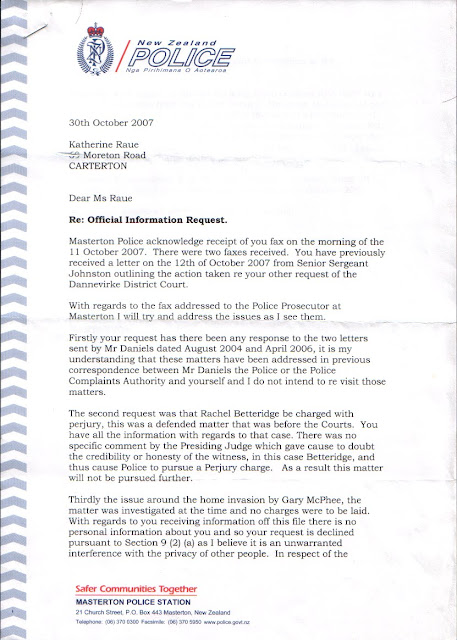 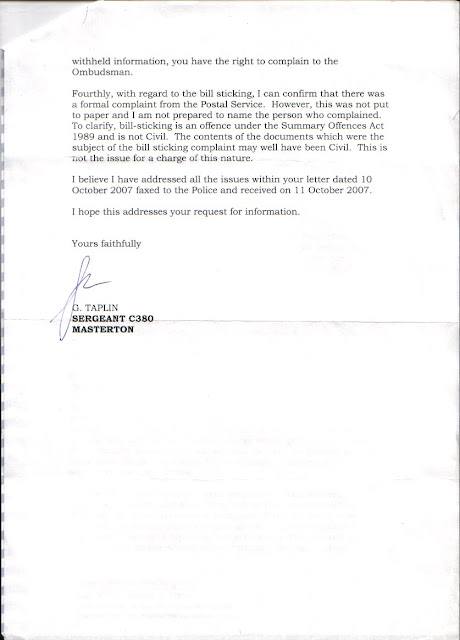 The letter above refers firstly to some of the letters written by lawyer Ken Daniels to the police, and Sgt Murray Johnston's rude and arrogant email dismissal of our complaints. The complaints have been corruptly ignored in spite of monumental evidence of fraud and gross misfeasance.

Secondly, the letter contains the refusal of the police to charge local prostitute Rachel Betteridge with Perjury, or anything else, after Betteridge and her husband sent me text messages, saying "You need a bullet" and "Watch your back" among other extremely offensive and threatening messages. Police have been provided with signed statements from two Justices of the Peace, and a considerable amount of other information, in support of my complaints regarding this lying prostitute.

Thirdly, the letter refers to the nasty drunken home invasion and assault committed by corruptly 'elected' Mayor Gary McPhee, and the refusal of the police to charge him or his co-offender. "The matter was investigated at the time and no charges were to be laid." - Oh really? WHY NOT? - This sounds like another excuse used by the police to let criminals off: "I am aware that the Carterton District Council Members, the Carterton Mayor and MP Georgina Beyer have recently discussed issues around the closing of the centre. In such circumstances the actions of the 'elected' officers of the centre are most unlikely to have breached any Criminal Law."

Fourthly, the letter refers to the Bill Sticking charges laid against me by Constable Cunningham in about 2003, and the fact that the prosecution was so zealously pursued although there was absolutely no evidence whatsoever to support the police wasting their time on it right from the beginning.

Let's compare the evidence in all of the prosecutions brought against me - nearly all of which have been unsuccessful and the rest of which do not stand up to scrutiny - with the evidence in support of all the complaints made by me, and supported by letters from several lawyers and community petitions, etc, all of which the police have refused to acknowledge or accept.

I came to Carterton in 2001 and have been the subject of a campaign of corrupt, politically motivated bullying by the local police and their associates, beginning with the refusal of the police to prosecute anyone for the assault and illegal takeover, malfeasance, etc at the Carterton Community Centre in 2001, the laying of the Bill Sticking charges in 2003, and have continued to the present day and the lies told to the South End School and St Matthews Collegiate, and the current corruptly laid charges of perverting the course of justice and escaping from custody, based on the word of one of the biggest criminals in Carterton! Good luck trying to convict me on this orchestrated litany of lies! Masterton Police prosecution staff won't touch it, the prosecutor has crossed his own name off the summons and substituted it with that of Constable Peter Cletoris Cunningham, who never made it past the rank of Constable for obvious reasons! - like his mates Constables Pope and Wakefield. 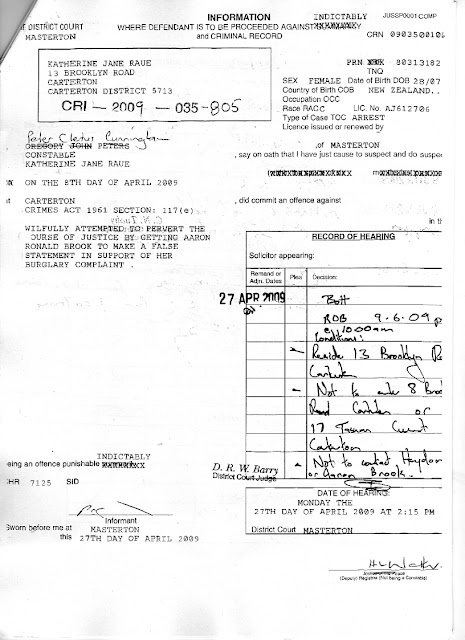 Posted by Transparency in New Zealand, Kiwileaks. at Friday, August 08, 2003 No comments: