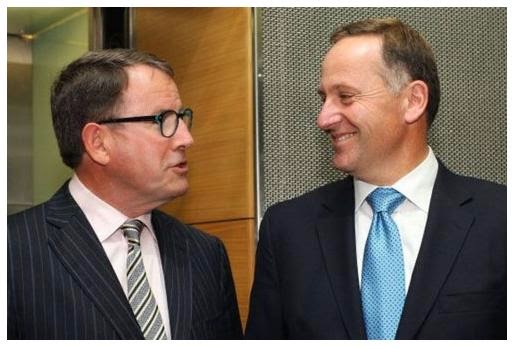 Here is the redacted copy of the report by Cheryl Gwyn into the involvement of the Prime Minister's staff in the release of information about Israeli spies to Cameron Slater as pressure mounts for the Prime Minister to resign.


Both John Key and Cameron Slater have ties with Israel, immediately after the NZ election the Times of Israel headline was "New Zealand's Jewish PM wins third term" before stirring emotions by mentioning that:

"During the election campaign, several billboards were daubed with anti-Semitic graffiti, with one board carrying the words “Lying Jew cocksucker” alongside a defaced image of Key with a black hat and side locks."

Kate Shuttleworth also reports on the matter in an article which includes some moderated public comment on the 'Stuff' website.

Key has again taken the opportunity to point the finger in Warren Tucker's direction, after failing to blame Dr Tucker for not advising his office after evidence emerged that Dr Tucker was telling the truth and Mr Key was not, Key's having another go at attacking Dr Tucker - one of the few public servants with impeccable integrity - after Dr Tucker has retired, and can no longer speak up in his own defence.  Rebecca Kitteridge apologised on behalf of the SIS after several years of revelations into the incompetence and corruption of the SIS and GCSB, as well as the collusion between those organisations, parliament and the Police.

Posted by Transparency in New Zealand, Kiwileaks. at Tuesday, November 25, 2014 No comments:

“Justice will prevail” is a belief Vince Clayton clings fiercely to as his civil claim against a bent NZ prosecutor was given new life by a Court of Appeal judgment two weeks ago.  Rather than relegation to the scrap heap of shattered ideals which such beliefs routinely earn, Clayton may be the first to successfully run the ‘old boy’ judicial gauntlet.

The Court of Appeal judgment overturned High Court Justice Priestley’s strike out (on grounds it was hopeless) of Clayton’s misfeasance in public office cause of action against Christchurch Crown Prosecutor Philippa Currie (pictured).  At the same time, the CoA judgment dismissed Currie’s cross appeal for strike out of Clayton’s remaining public law compensation claim against the NZ Attorney General.

Clayton v Currie seeks financial damages against Ms Currie and the Crown for concealing exculpatory evidence in the 2007 conviction of Clayton and his partner Linda Westbury on 34 charges of receiving stolen goods.   The plaintiffs seek just over $2 million, including $100,000 in personal assets the Police have never returned.

Mr Clayton served 14 months in prison in 2007 before the Court of Appeal determined he and two co-defendants were victims of prosecutorial misconduct by Currie.  Specifically, Currie withheld evidence that the Crown’s chief witness was given sentencing concessions for unrelated criminal offending in exchange for his testimony.   Currie not only failed to disclose this inducement, she provided an assurance to the defendants her written statement no such inducement was given was a complete summary.  In fact, Judge Radford had deferred sentencing of the witness until after Clayton’s trial, recording the agreed intent “of course significant discount (on sentence) for the matter which involves the Christchurch trial.”
The witness, for his part, stated repeatedly under cross-examination his only incentive to testify was one of conscience.   The court granted the repeat offender name suppression to protect his reputation.

The Court of Appeal was delicate in its ruling, careful not to reveal the extent of Currie’s deception which included court transcripts proving Currie refused to divulge sentencing notes on her star witness and failing to respond to trial Judge Crosbie’s declaration from the bench that the prosecution owed the defendant such notes if they possessed them.  The judgment concluded only that Priestley J was wrong to label the misfeasance case as hopeless, suggesting that determination must be left to the trial judge.

The evidence leaves little doubt Ms Currie repeatedly deceived the court and defendants in criminal prosecutions against at least five defendants.  Peter Machirus, Nadia Peletio and Gary Morrell are other victims whose claim against Currie has been stalled in the High Court awaiting this Court of Appeal judgment.  Machirus has claimed the tort of deceit and malicious prosecution against Ms Currie.  Earlier, Machirus had summons issued against Currie in a private prosecution but the prosecution was thwarted when the Solicitor General used his executive power to stay prosecution.  In 2007, Machirus was labelled, incorrectly as it now turns out, a burglary-ring ‘kingpin’ by Police in their three year, multi-million dollar Operation Rhino.

Deregistered barrister Devina Murray is exploring obtaining propensity evidence against Currie since her 2013 conviction for smuggling contraband to a high security prisoner.
Ironically, it is this broad level of offending by Ms Currie which now provides the greatest pressure on judges to cover it up.  Christchurch Crown Solicitor Brent Stanaway in the High Court and John Pike QC at the Court of Appeal both claimed from the bar that sentencing notes on the witness were available directly to the defendants and on this basis alone the plaintiffs’ claim against Currie could not succeed.  When Clayton’s lawyer refused to call out Mr Pike’s false claim the defendants had never asked Ms Currie for a copy, counsel and client had a stern discussion, ending with them parting ways.

A week before the Court of Appeal judgment, the Canterbury Law Society shocked observers in ordering Currie pay a $500 fine and $2,000 costs after its standards committee determined she had deceived the court.  The offence carried the potential of striking Currie off as a lawyer.
Currie has refused to pay Clayton and Westbury the $8,000 costs awarded by the Court of Appeal, saying she has yet to decide on any appeal to the Supreme Court.
Posted by Transparency in New Zealand, Kiwileaks. at Monday, November 17, 2014 No comments: