The question mark in the title of this article is a real Freudian slip. This is a work of fiction, designed to cover up a firmly entrenched local problem of alcohol abuse. Police support and condone it because they are among the worst offenders.

Sam Priestley died after being pressured to drink a yard glass of beer in the family home and then go to the pub and drink some more. The reporter, Nathan Crombie uses words like "the traditional quaff" "cheered on by family and friends", etc, to try and 'normalise' and excuse this behaviour. Sam was a really, really nice guy, his mother worked with me at St Matthews Collegiate, as a Boarding Matron, she is an alcoholic, she encourages and approves of this culture of alcohol abuse and is in total denial of the fact that alcohol was almost certainly involved in the death of her son, and was almost certainly the cause of it. Recently it has been reported in the news that the Department of Corrections is stating it is dangerous to drink a similar quantity of WATER in a short period of time.

Nathan Crombie is a great supporter of this sick attitude to alcohol and bending the truth to the point of lying, it's time to have a good look at the journalists who shape the opinions of the community with this fiction. They invent and fabricate stories like this to protect their friends and their reputations.

This attitude of denial, and "cheering on" this "traditional quaff", is causing the problem. Five days after Sam died people who should have known better were proclaiming that it had "nothing to do with alcohol or drugs." - Alcohol IS a drug for goodness sake and this kind of "reporting" isn't journalism - it's FICTION and propaganda!  It was another year or so until the Coroner's report. 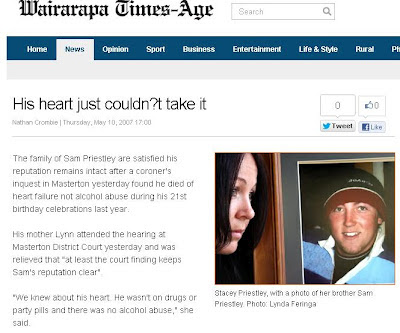 Five days after Sam died, the irresponsible authors of fiction at the Wairarapa Times-Age published the following:


"Sam died suddenly of an undetermined medical condition at his 21st birthday party at the Homestead Tavern on Saturday."

Mr Phillips said it was "not pills or booze or anything like that" that led to Sam's death, but "faulty wiring was probably the best way to describe it".
Sam's father, Randall Priestley, agreed with this assessment, but added an alternative view.
"Maybe his heart was overfull ? look at everyone here." (sic).

This is a link to another creative decision from a Coroner. This young woman expressed a clear intent and a plan, and then took the action she said she would for the reason she gave, no matter how much others don't like that, and the decision that it isn't suicide is outrageous quite frankly. If it's not, if it's "text bullying" - then the NZ Police need to charge Rachel Betteridge and her husband forthwith for sending me messages saying "you need a bullet" and "watch your back" - not to mention PERJURY!

Posted by Transparency in New Zealand, Kiwileaks. at Monday, May 14, 2012