Independent report damns EQC as they gang up with Her Majesty's Solicitor General and the Clown Law Orifice to persecute whistleblower: 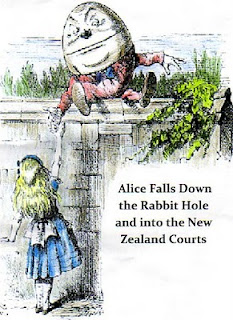 Marc Krieger cast transparency over the 'work' of the Earthquake Commission (EQC), and provided an independent report into their activities , and was recently served with an application by Her Majesty's Solicitor General in respect of alleged contempt of Court for his efforts.  The application is astounding - and deeply concerning if it indicates the calibre of the writers and the focus of their efforts.

Wellington consultancy Martin Jenkins (MJ) and Associates and insurance expert Derek Scott were asked to conduct an independent review of EQC’s response to the Canterbury earthquakes.

They have reported that the Earthquake Commission planned poorly for a major catastrophe and therefore lacked the leadership and systems needed to cope with the Canterbury earthquakes.

The consultants interviewed 75 EQC staff and contractors late in 2011 and early 2012 and found:

EQC had a permanent staff of 22 and outsourced all core functions – call centres for claims lodgement, claims administration and processing (to Brisbane) and field operations.

“In the absence of overarching direction individual solutions were created on the spot with negative downstream consequences,” the report said.

It also criticised EQC for its lack of expertise on its systems capability. The expertise “needed to be at hand to constantly advise the management of realistic possibilities”.

“Without adequate reflection new challenges were often met with more resources or new teams rather than working smarter eg experienced staff claimed better use of the ClaimCenter system could have saved 100 staff.”

What happened was that a group of greedy public servants saw an opportunity to create a lot of overpaid jobs for their mates and because of a total lack of accountability in NZ at present regarding the public sector, they got away with it, to the cost of all NZ taxpayers, and the people of Christchurch and Seddon in particular.

EQC’s lack of planning and project management skills meant suppliers took advantage charging premium rates, the MJ report said. Hourly rates were set which were more costly than fixed-term contracts and the report gave the example of Datacom charging a scanning cost of $6 per page.

The Scott report said EQC found it difficult to maintain standards as leaders at its various field offices and imported assessors were inconsistent and the pods were all managed differently.

“The training function experienced difficulties in responding to continual changes in form and work processes made by individual field offices, whilst the Canterbury Events office frequently changed the names and functions of teams.”

Further thought also needed to be given to better prescribing jobs to the provider agencies.

“… A number of assessors provided by Verifact (Brisbane-based firm that supplied 210 Australian assessors) were either physically unsuitable for the job or lacked the necessary skills including those of basic numeracy. Many assessors and estimators appear to lack knowledge of EQC cover, the 1993 Act, building code or repair strategies even after induction and training,” the Scott report noted.

Unrest occurred when inexperienced and untrained staff were paid the same rates as personnel previously contracted to EQC.

Effective performance management did not appear to be part of EQC culture, Scott said, with the focus on quantity rather than quality.  Judge Noble said "I'm left with the uneasy impression that the understanding of accountability is blurred" regarding Crown accountability.

The NZ High Court sits on shaky ground records the application of Her Majesty's Solicitor General and the Clown Law Orifice, and Mr Krieger's response, and other reports show that lawyers and Judges are fiddling with themselves while New Zealand democracy and human rights go up in a puff of smoke and flames.

Corrupt Police prosecutors like Garry Wilson and Gregory Peters regularly conspire with Wilson's partner, Masterton Court registrar Liz Harpleton, and other Police, lawyers and Court staff, etc, to pervert the course of justice in the Masterton Court - they are incompetent and corrupt in the extreme.

Complaints are routinely fobbed off and ignored, and the social and economic costs mount up - a dysfunctional legal system masquerading as a 'justice system' - used as a trough for pigs like Bryan Yeoman and the above mentioned police officers, ex police officers, lawyers, etc, and some of the highest rates of suicide in the world.

Posted by Transparency in New Zealand, Kiwileaks. at Friday, October 04, 2013