Spot the difference:
Two complaints were made to Police regarding the takeover of the Carterton Community Centre, the lawyer representing the group who illegally took it over, Mark Hinton - who knew full well that the group he was representing had no legal standing whatsoever and were the very people who had committed the fraud etc, complained that I was in possession of property belonging to the Centre, namely the Minutes Book and the financial records, and I alleged they were illegally occupying the Carterton Community Centre and illegally operating the bank accounts and the incorporated society, stealing the mail, committing fraud, the Chairman had assaulted me and smashed two of my teeth!

One of these police investigations was very thorough, indeed and the other was deliberately and corruptly non existent. 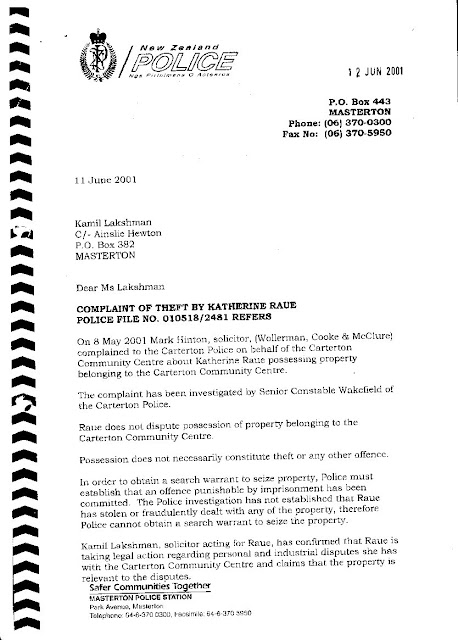 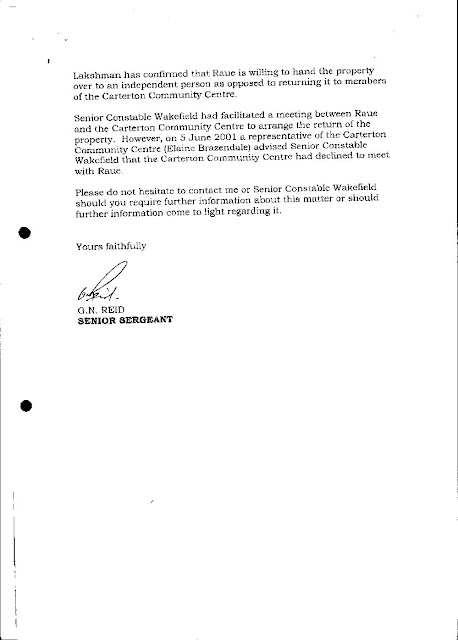 Area Commander Rod Drew was well paid to declare that "Because Georgina Beyer and the Mayor of Carterton have had discussions around issues regarding the Centre it is most unlikely that any Criminal Law (sic) has been broken" - what utter lies!  Drew knew perfectly well that there had been serious criminal offences committed by Beyer and 'her' mates on the Council!  That's why they were forced to wind it up in the High Court (the Carterton Community Centre Inc) and that's why all the funding stopped - they had to admit to the High Court that it was true - they only had eight members - only EIGHT peoplein this community supported the thieving liars - and the minimum number of members required to operate as an incorporated society was fifteen. 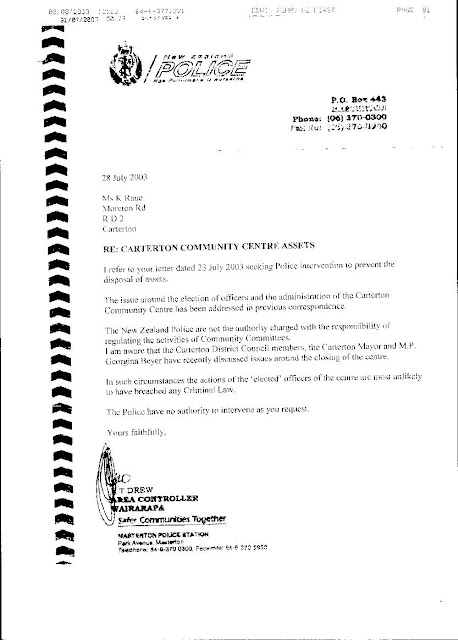 My complaints were never investigated at all because Area Commander Rod Drew decreed that because Georgina Beyer, formerly known as George Bertrand, the son of a thieving policeman funnily enough, a transvestite ex-prostitute who has never had a proper job in 'her' life and bludged off the tax payers of New Zealand long enough, had "discussed issues around the closing of the centre" and that "In such circumstances the actions of the 'elected' officers of the centre are most unlikely to have breached any Criminal Law." What utter rubbish! This is blatant corruption! It is politically motivated corruption which is even more unacceptable too!

Firstly, we need an inquiry into the corruption that resulted in the closure of the former Carterton Community Centre, and the actions and involvement of people associated with the Carterton District Council. The purpose of this is to hold people accountable and honestly assess their suitability for involvement in community affairs through a proper social audit, and weed out the rotten apples, the people in the District Council who are holding the town back, holding the District down. Then we can get on with identifying and electing capable honest people to replace the incompetent and corrupt ones, and send the message that the people of the Carterton District are not going to put up with second rate governance any more, we're going to do things differently now, because it's the putting right that counts. Vote for Kate Raue and let's put the Unity back in this community! Let's elect someone who is not only colourful but capable as well, the Audit Report on the Carterton District Council (highlights are contained in paragraphs 93 - 101 at that link) is an utterly damning indictment on McPhee and Beyer, so are the crime, violence and suicide statistics!

Secondly, we need a proper Community Resource Centre, and community gardens, run by capable and honest people, not the grand half planned Events Centre, or the Information Centre/Gallery, which is focussed on providing a glorified attendant paid for by someone else to staff the "Gallery" promoting local artists like those featured at the post titled Art Fart Stinks. Artists like Jo Roffe and Sean Crawford were the focus of the last community centre, and are the reason it was closed, by Sean Crawford's father John and mother Heather and their mates, after funding stopped when the funders became aware of the fraud and misfeasance. If artists want to make a career choice of what for many of them is a glorified hobby, why should taxpayers fund it? I'd quite like to swan round all day being an artist too, but I'd rather do an honest day's work. I've never felt the need to apply for $1000 grants to have an exhibition in a free gallery, come off it Sean, you're a bludger, way worse than any WINZ beneficiary.

When I was running the Community Centre it focussed on getting people into employment, creating jobs, helping people access resources and information, supporting families, and running courses and programs and initiatives such as the Carterton Community Gardens, that really benefited individuals and the community as a whole, in particular the less well advantaged.   It operated as the hub of the community.  The Community Gardens provided practical help to establish gardens in every home, we provided practical assistance to those in need.  The new Event Centre has so far hosted "The Best Whorehouse in Texas, the Full Monty, and Ladies Night"  family entertainment?  No.  An excuse for local lawyers like Caroline Wait, Gareth Bodle, Mark Hinton, John Greenwood et al to 'perform' on stage and gratify a few egos.

I represent the Residents and Ratepayers who voted for me at the last election, and who have signed petitions calling for a proper inquiry into the matters regarding the Carterton Community Centre, Event Centre, Community Facility, and the general dysfunction, incompetence and corruption at the Carterton District Council.

Beyer the Liar's fervent sales talk in favour of amalgamation is aimed at furthering the cover up and keeping the same old snouts in the trough. The ones pushing the idea are the same ones responsible for the global financial crisis, their lies only fool the ignorant, the ill informed and the gullible, and we must speak up. The world is watching.

Posted by Transparency in New Zealand, Kiwileaks. at Friday, June 11, 2010