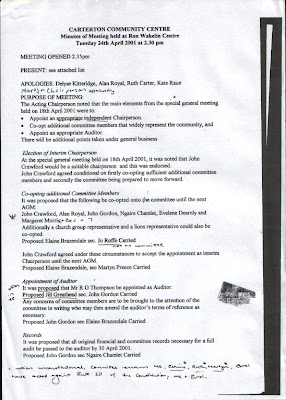 Minutes of the CARTERTON COMMUNITY CENTRE

Special General Meeting-Ron Wakelin Centre Wednesday 18th April 2001
To discuss governance issues and elect a new committee.
The Meeting was opened at 7.30 pm
John Gordon was chairing the meeting, although he was not a member of the Society, appeared to have no mandate from the members, and had never ever attended a meeting of the Carterton Community Centre committee, or ever been to the Centre at all in fact.

1. Election of new committee:
John Gordon tried to tell everyone this could only be done at an AGM, but Kate Raue pointed out that it could certainly be done at a Special Meeting called for that purpose, according to the Rules.

2. Governance:
John Gordon noted that currently the committee is dysfunctional, and then he stated that “either everyone resigns or we get new people on the committee”. Kate Raue stated that she saw no reason why she should resign, as she had done nothing wrong. Heather Crawford questioned whether Kate Raue had infringed the Rules by not attending three meetings in a row, and was quickly informed by John Crawford and John Gordon that was not the case. There was no further discussion, or question of removing Kate Raue from her Executive positions.

Motion 1: That this meeting appoint an acting Chairperson and co-opt sufficient members to the committee for the committee to operate efficiently until the next AGM. Proposed Kate Raue Seconded: Martyn Preece. Carried

Motion 2: That the maximum number of people be co-opted onto the committee as allowed by the Constitution. Proposed: Kate Raue Seconded: Martyn Preece. Carried.

John Gordon nominated John Crawford be appointed Chairperson. John Crawford replied that he was only prepared to do this if the past was forgotten.
Kate Raue opposed the nomination for reasons relating to John Crawford’s recent involvement with the Centre, false and unauthorised statements on behalf of the Centre, bad judgement, and serious breaches of the Constitution and the Rules of the Society; and his stated refusal to address the recent serious assaults at the Centre, deeming such a serious event, occurring only nine days earlier, to be “historic”. The nomination was not seconded, or supported in any way.

John Gordon then offered to become a committee member, and this failed to gain any support from the meeting either.

John Gordon then suggested the meeting be closed, this was opposed.

Motion 3: That the committee unanimously appoint an independent auditor at a meeting in one weeks time, to conduct a full audit before the AGM. Proposed: Kate Raue Seconded: Craig Baylis Carried.
Various amendments to the above motion were proposed and seconded, but had dubious support from the majority.
The meeting was closed at 8.15 pm.
The image above is a true copy of the minutes of 24th April 2001, and it can be seen that a Motion was passed that Mr R G Thompson be appointed Auditor. I later contacted Mr R G Thompson, and he told me that after he indicated the likely outcome of an audit, which in his view would be very unfavourable to the committee, who like Councillor Greathead were mainly associated with the Carterton District Council, she asked him to return the records to her and not complete the audit and to forget he ever met her basically. The reason for this is obvious when you look at the financial records of the Centre. Mr Thompson assured me that the audit was never undertaken, but that an inspection of the financial records showed obvious fraud, as lawyers Ken Daniels and Michael Appleby stated to police.
Posted by Transparency in New Zealand, Kiwileaks. at Monday, March 01, 2010