CYPS: Evidence of a false complaint and a corrupt 'investigation': 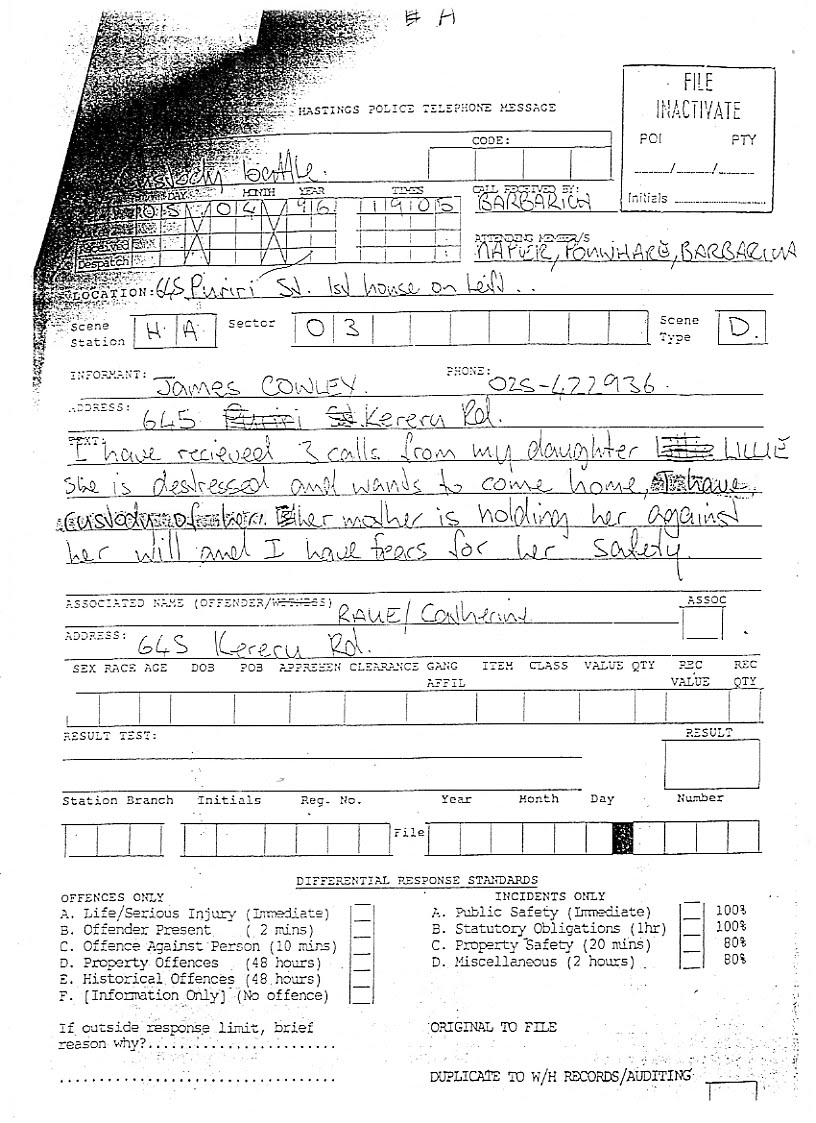 My thirteen year old daughter was dragged away against her will - and mine - on the 5th April 1996, on the basis of a false complaint to Police from her father, who'd had next to nothing to do with her previously, evidenced by an affidavit from the boarding school she attended among other things.  He told Police she lived with him and was being held against her will and that he has custody and there is reason to fear for her safety - all lies.  This is a copy of the Police report proving this, the grey area where it says "I have custody of her" is where I used highlighter on the document.  CLICK ON THE DOCUMENTS TO VIEW THEM   Sgt NAPIER has since said (in writing) that he regrets his actions.  He was conned by a corrupt social worker into believing this pack of lies. 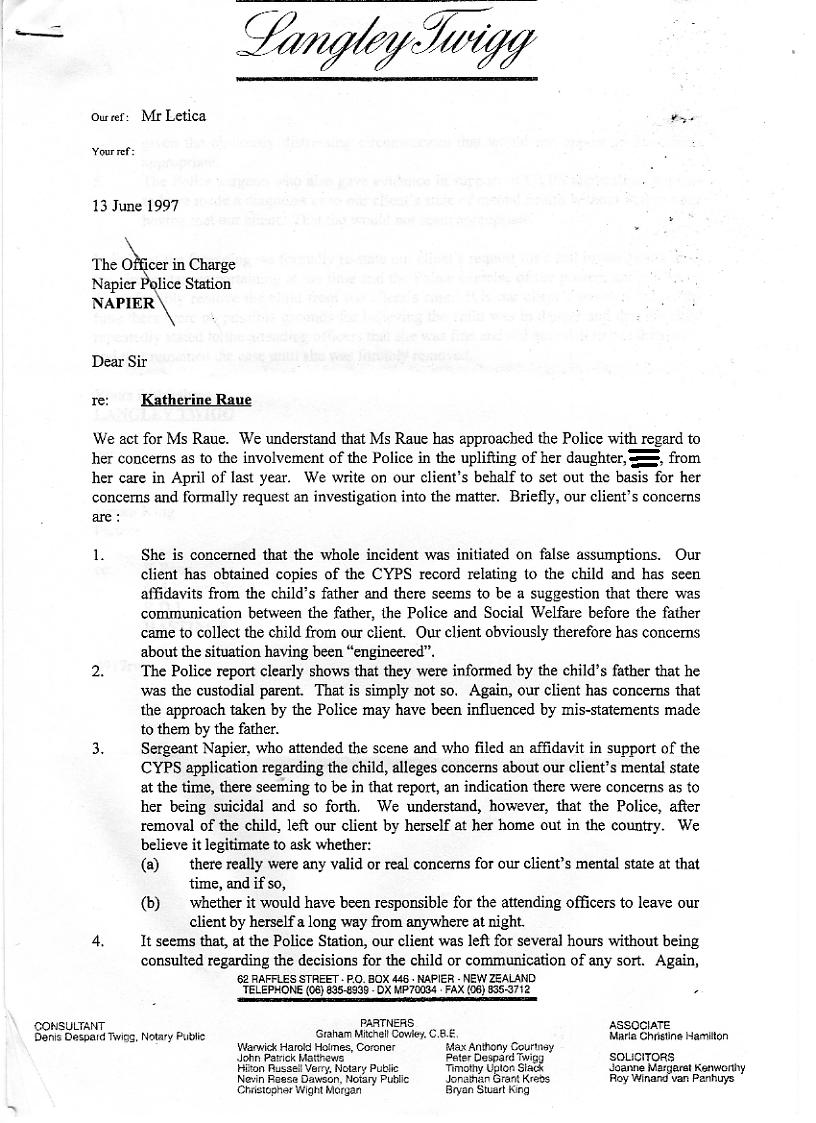 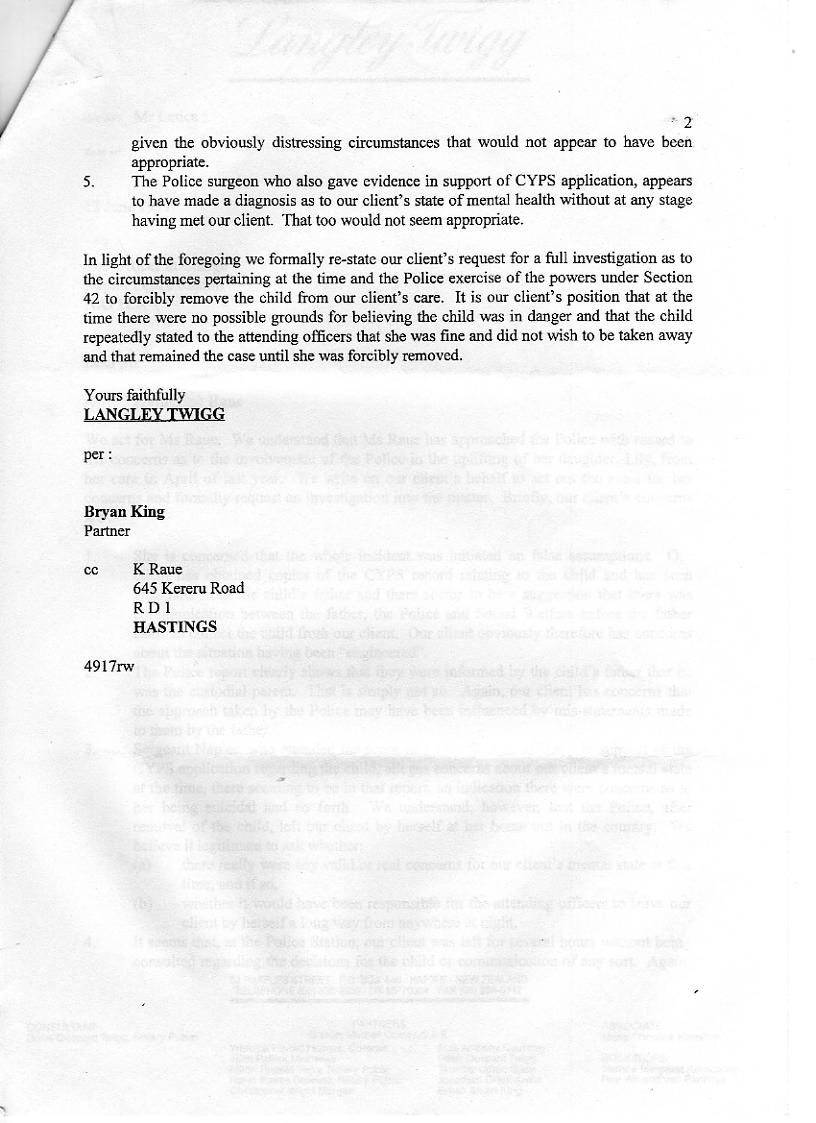 This is the grounds for removal according to James Cowley's affidavit - vague allegations like "the conversation unfortunately from her point of view was very threatening."  I made no threats whatsoever as he knows perfectly well, which is why his affidavit states that the Police said they'd 'help' him but that they did explain to him that the situation would be "difficult" - which is why James Cowley lied, because that was the only way he could persuade the Police to kidnap my daughter and give her to him. 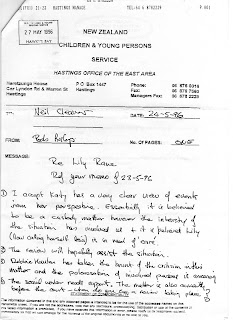 Here is a memo from the Hastings manager, Bob Bishop, to the Area Manager Manager, Neil Cleaver, which says the the 'social worker', Debbie Houston, qualifications - NIL -needs support because she's taken the brunt of the criticism!  Of course she did - she's admitted that the matter was a custody dispute and not a matter for CYPS at all!  The fact of the matter is that the mother and daughter needed the support, not the corrupt and dishonest 'social worker'!

Below that is another memorandum to the Area Manager from the Hastings manager regarding the upcoming investigation, in which he asks "Can you please tell me what "Terms of Reference" [the investigator] has?  Is he to speak to Mrs Raue's counsel?  Police?  Or is it strictly "in-house"? 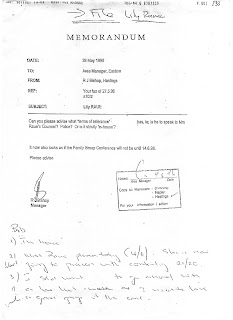 And below that is the typed transcript of the notations on the memo from the Area Manager, which says:


Here is the response I received from the Area Manager of CYPS in Napier to my letter asking what the qualifications of the social workers who kidnapped and abused my daughter were.  As you can see, two of them, Deborah Houston and Hazel Hori had absolutely no qualifications whatsoever, and the third "social worker", Donna Remihana had a BA - pathetic!  Not a single social work qualification among the lot of them! 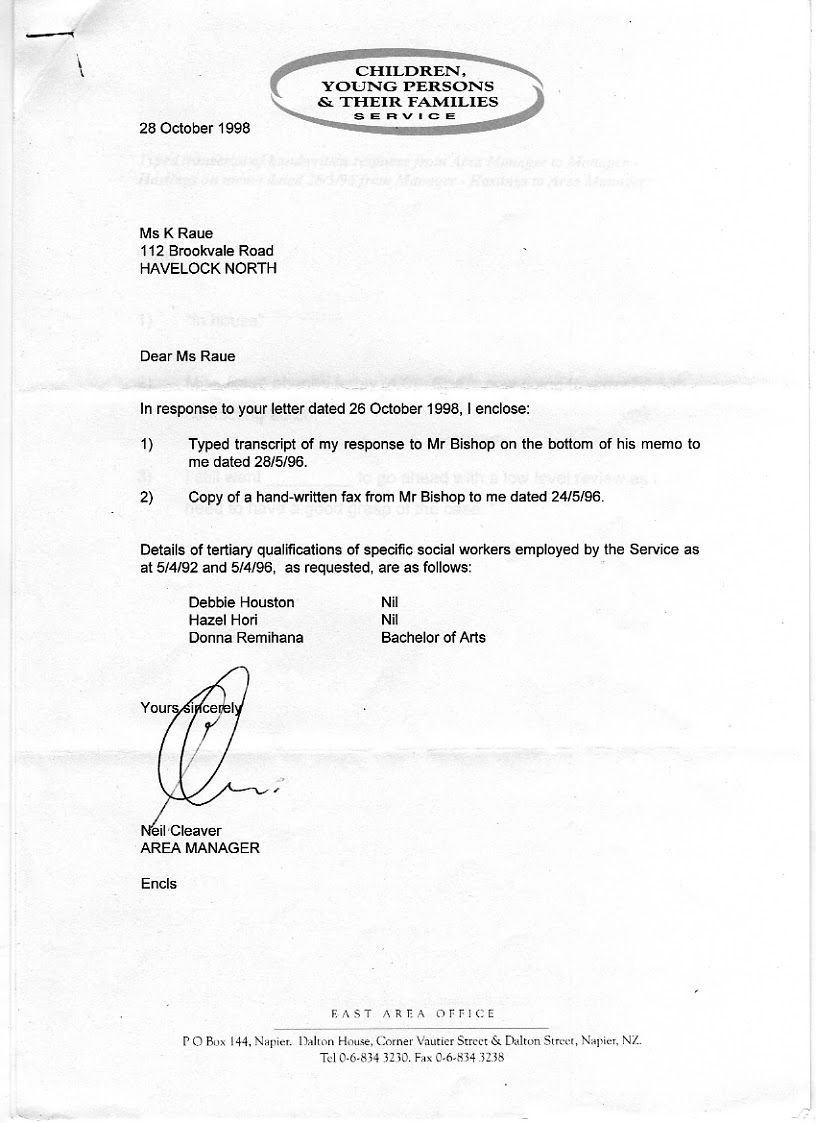 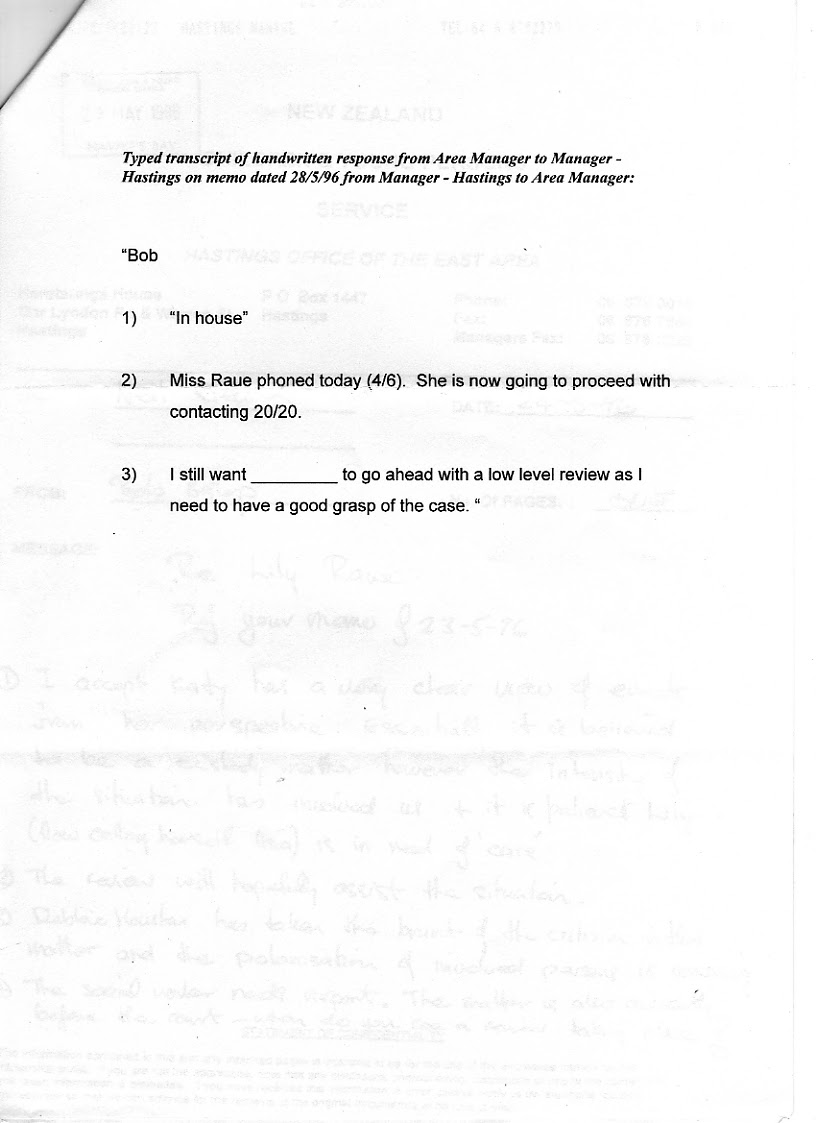 Below is a memo from the Area Manager to the Manager of the Hastings office about my complaints, noting the concerns expressed in the fax above (the social worker needs our support) confirming that the "review" is nothing but damage control to avoid "Ministerial activity or media interest." 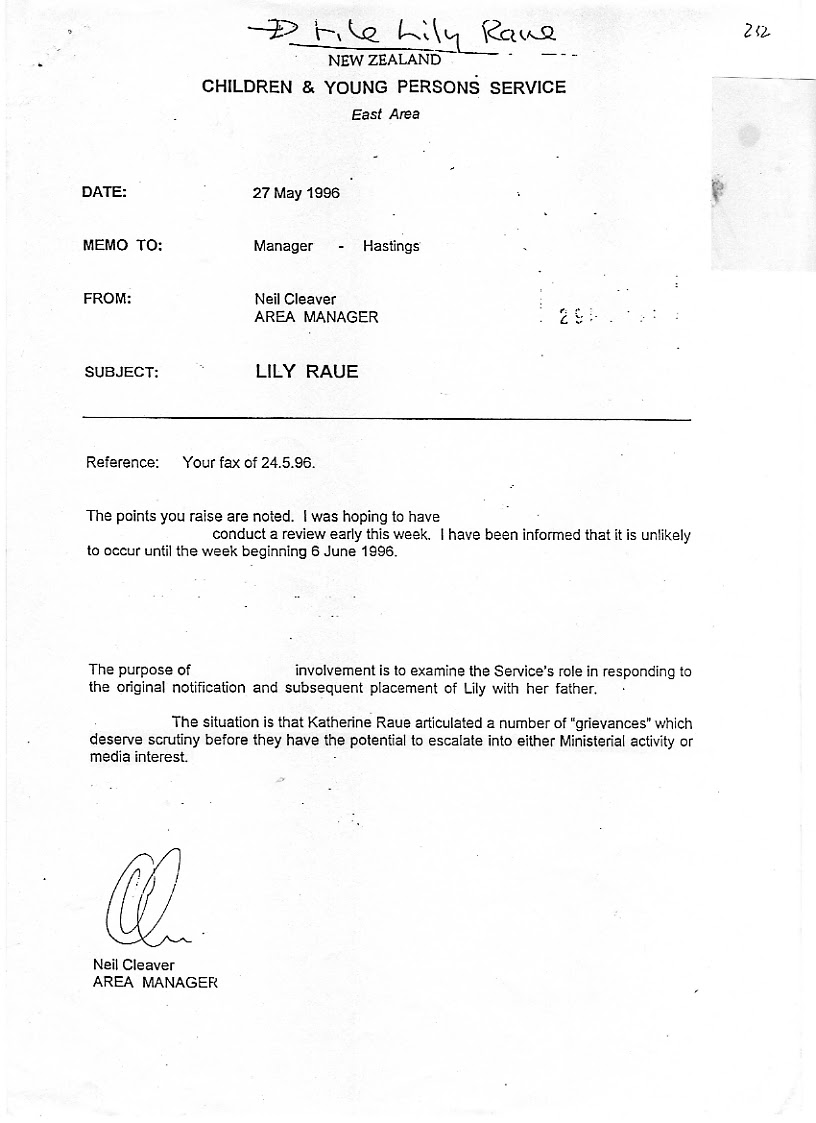 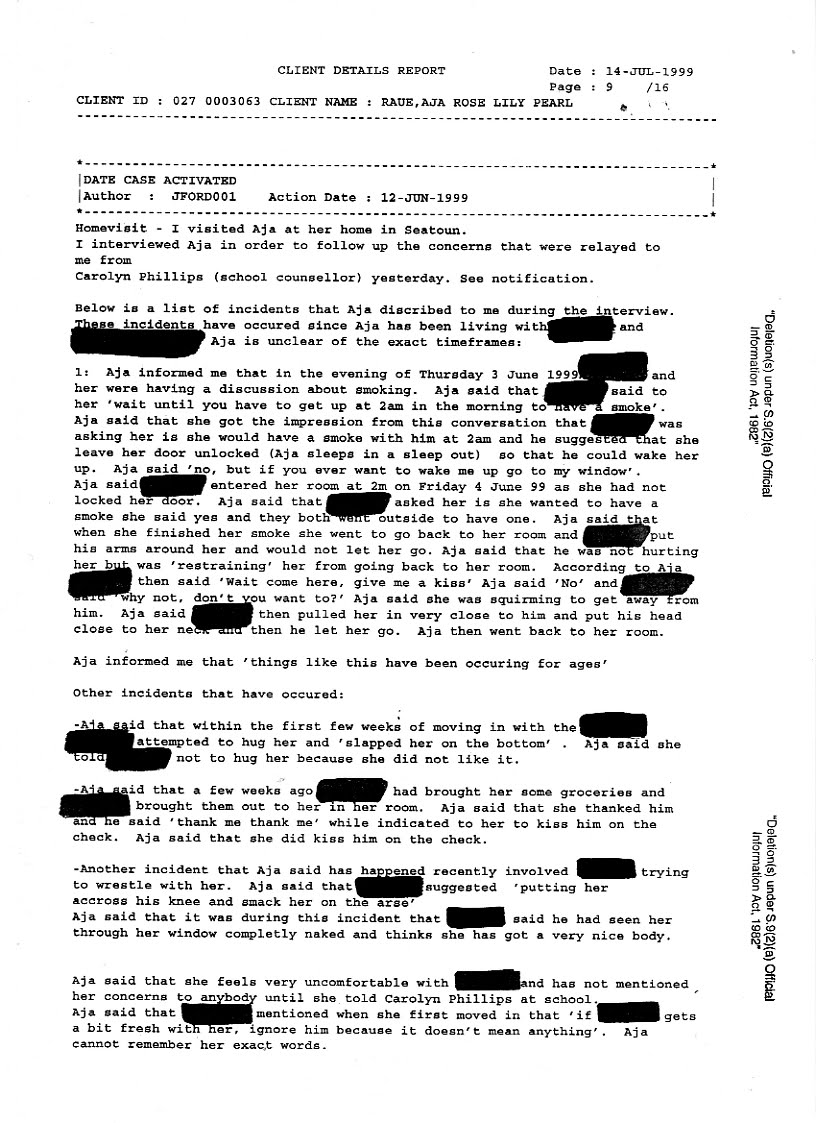 The document above documents how my much loved daughter was then sent to live with Richard and Lorraine, Open Home Foundation caregivers in Nelson, who these unqualified CYPS 'social workers' decided would be much more suitable than me to bring up my daughter, and how Richard sexually abused her, and by the look of it, he made a habit of abusing young girls in his care judging by the comments made by Lorraine, "Don't worry if he tries anything he does it all the time, it doesn't mean anything."  So, taxpayer funded serial paedophiles apparently. 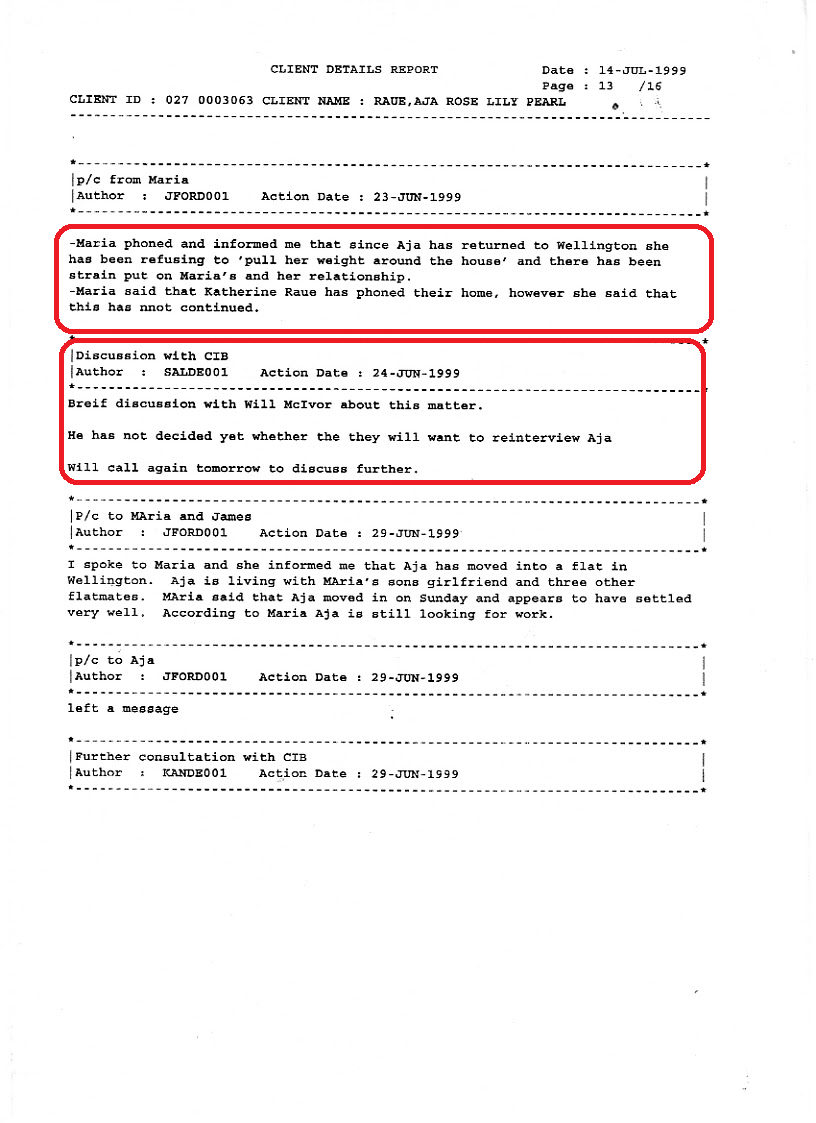 Nine days after being returned to James and Maria Cowley my daughter was sent flatting because according to Maria "she wasn't pulling her weight around the house."  The document evidencing this will be uploaded shortly - Maria's already had a go at taking me to Court for saying things about her on the internet - she failed spectacularly and the Police officer responsible for assisting her in that not only left the NZ Police, he fled the country to avoid being charged with perverting the course of justice among other things.

Maria Cowley encouraged James not to pay child support, she charged him "rent" instead, and it paid off her mortgage while he declared bankruptcy, avoided tax, etc, while accumulating a number of luxury vehicles, farm in the Sounds, etc.  Neither of them cared less about our daughter, neither ever sent her a birthday card let alone a present, evidenced by the letter from Joy Cowley to Woodford House school telling them that he had no part in her life - in another letter she confirms he is not to have unsupervised access - and the affidavit of the headmistress, which will also be uploaded shortly.

Posted by Transparency in New Zealand, Kiwileaks. at Wednesday, March 25, 2009

Email ThisBlogThis!Share to TwitterShare to FacebookShare to Pinterest
Labels: cyps