Pictured below is the 'work' of a nasty woman called Ariana Paretututanganui -Tamati - a devious, conniving, deceitful, liar, who is attempting to infiltrate and undermine the Wellington protest against the GCSB Bill and hijack it for her own personal agenda with the help of Max Dillon Coyle.

She has undermined and sabotaged all the efforts of the people who HAVE been organising the Wellington protest against the GCSB Bill this Saturday, while she's been doing nothing but wasting time and causing trouble - here's the latest evidence of her work - she and her low life mates have been reporting this perfectly innocuous post on the Wellington Event page (at the link above) in a co-ordinated, targeted attack in order to achieve the post being removed and me blocked from facebook - the post being the order of ceremonies for the Wellington event - which I am the Host of!

Who is behind this really - who is incentivising her to try and derail our peaceful protest with her shady mates talking about blocking roads and other violent action, and grandstanding for her own political agenda.  Even her mate Pete George couldn't stand it.

She previously deleted all the files on the organisers page - the list of speakers, the order of ceremonies, the fliers, the list of events, the outline of the skit, etc, she's lied and claimed other people's work as her own - she's a prize cow.  She's standing for the Mana party apparently - come along on Saturday and listen to her make a fool of herself. 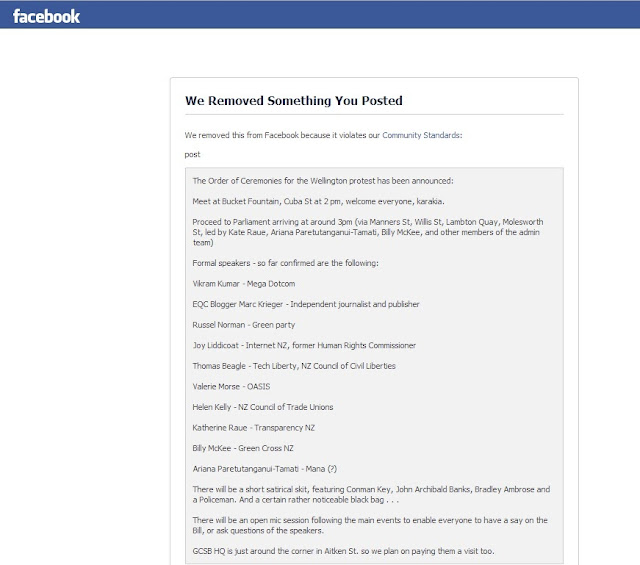 In this screenshot, you can see that I am the host of the event, but I now cannot post to facebook for 24 hours, after this little piece of scum called Ariana Paretutanganui-Tamati made false and malicious complaints - she's apparently representing the Mana party - I suggest they UP THEIR GAME!  - AND GET RID OF NASTY LITTLE TROUBLEMAKERS LIKE HER and find some DECENT candidates! 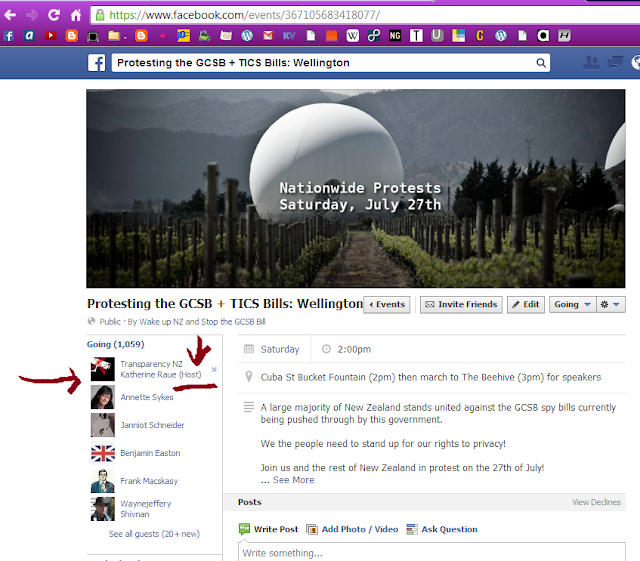 Then, she made the mistake of writing a huge diatribe for all the world to see - accusing me of being some lady in Napier - who came on and went nuts - and raving on about Ariana's mate, delusional fraudster Cherie Sweeney -Ariana Paretutanganui-Tamati couldn't apologise quick enough and admit her complete idiocy in accusing me of "being Fera Divinci on facebook"  - Regarding her claims that Cherie has complained about me - anyone with enough money to waste can pay a lawyer to write utter nonsense like this.  No Court has ever given it a file number I'll bet!  No wonder this country's in the state it's in - with "politicians" like Ariana Paretutanganui-Tamati "in charge of" the controlled opposition. 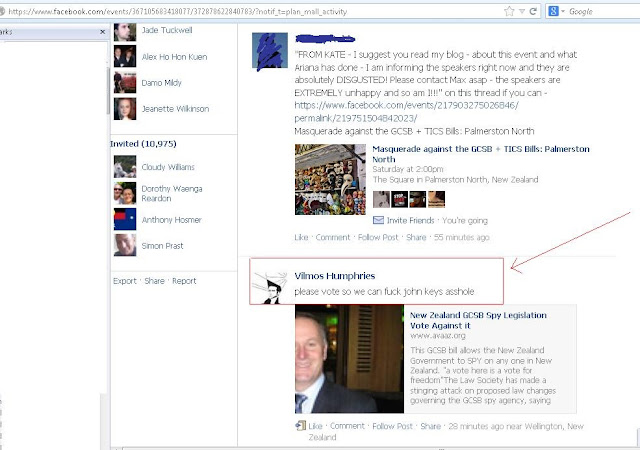 While I was blocked from Facebook and unable to communicate with the attendees of the protest I was hosting, thanks to Ariana, Max Dillon Coyle and other joint admins of the event page failed to remove a number of offensive posts such as the one above, for hours, and in some case days.

This picture shows that I can't even respond to questions from other organisers directed to me!

Ariana has SABOTAGED this protest and should be booted out of politics entirely!  She's nothing but a lying little attention seeker without any brains!  Here's how the facebook page is now being run - people now too scared to bring their kids because of Ariana and her gang mates and this outrageous and disgusting posting all over the page of offensive and violent rubbish from a bunch of gang members and half witted attention seeking "politicians" and self appointed "activists" - they're NOT activists - they are a bunch of half witted attention seekers!

Speaking of journalists, I received an email from Andrea Vance, one of the speakers I invited, she'll be there on Saturday if she can make it, hopefully we can prevent Ms Ariana PT derailing it. 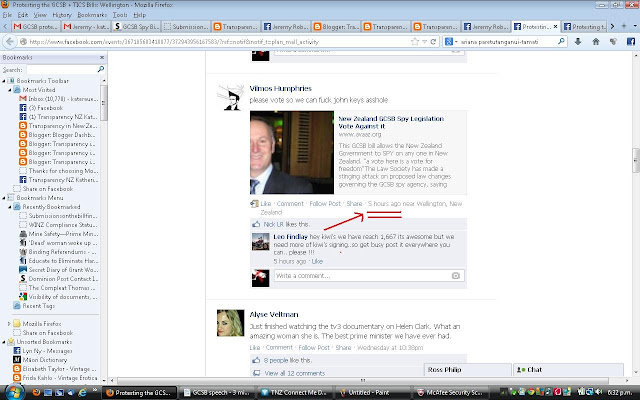 So, after posting her non stop nonsense, which culminated in an extraordinary rant in which she tells the world that I am "Fera DiVinci on facebook" and then has to admit that's it's a lie, after the real Fera DiVinci fronted up about it - on top of all the evidence of her malicious complaints to facebook from her and her Mana party mates, and slanderous lies about me, Max Dillon Coyle - who works for APN, selling 'news'papers, took the manipulative action of appointing Ariana P-T 'host' of the facebook event - seven days after the event - as the screenshot below shows!

This gave her access to delete documents on the facebook page - which she had repeatedly done in an effort to sabotage the organisers of the event, and deleted the entire page a few days later to get rid of the evidence.  Why would Max Dillon Coyle appoint a 'politician' like her 'host' of the event after that?  I and the rest of the organising team organised and hosted the event, and changing this apparently minor detail is actually a very devious action.

What's his agenda, and what's the agenda behind some of these little facebook groups, etc?  Max Dillon Coyle sells papers for APN - the tail's wagging the dog - she didn't 'host' the event - she HIJACKED it!  The date of this screenshot shows no 'likes', ten days later.  Speaks for itself really. 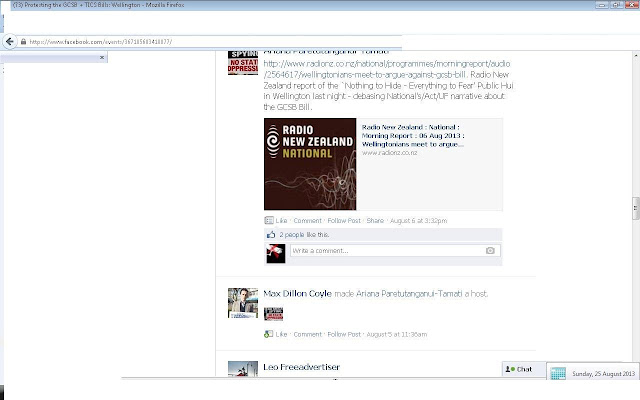 The NBR reported that there's an alarming amount of bribery in NZ.  Marketing and journalism are areas which are particularly prone to bribery and 'incentivism', particularly when you add politics.

Max Dillon Coyle has a track record of political manipulation as this report in the Waikato Times shows.  He's clearly a master media manipulator - anything to sell papers - ask Max Dillon Coyle why he DID make her host of the event a week after it was held!  More on Max here. 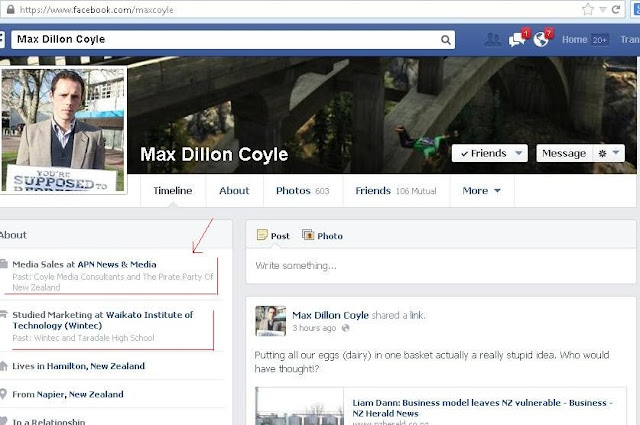 Update on the protest and subsequent events at this link.

Posted by Transparency in New Zealand, Kiwileaks. at Thursday, July 25, 2013