The ongoing corruption and incompetence of the Ministry of Education and the administration and governance of the South End school is exposing the lack of oversight of our schools, which presents a massive risk to our children and is particularly relevant as the implementation of Charter Schools looms.

Hekia Parata is completely incompetent and has dealt with this matter in a deliberately corrupt manner.  There is no misunderstanding, just a deliberate and ongoing attempt to lie and decieve, on the part of the school Board of Trustees, the Ministry of Education, and the Minister herself.  Here's the most recent correspondence regarding this matter - the complaint is ABOUT the Board and any attempt to pass it on TO the Board is ridiculous - they have refused to respond to communications since sending me the slanderous and defamatory letter sacking me in 2009!  Furthermore, the incompetence and corruption has continued to be revealed and I was handed private correspondence between the Principal and another staff member showing that he was sacked in a similarly outrageous manner, and his privacy breached in a disgraceful manner. 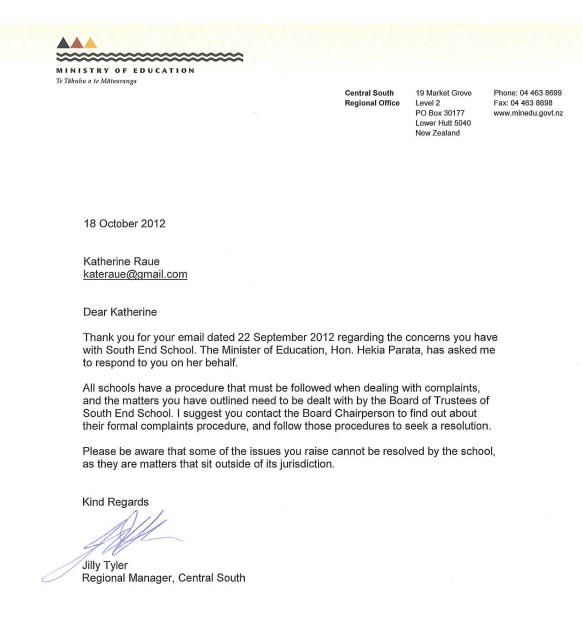 Jilly Tyler knows perfectly well that I have sent over thirty emails to the Board of Trustees regarding this matter, and made numerous attempts to resolve the matter according to their 'procedures' and they have REPEATEDLY refused to respond or engage with me in any manner whatsoever - which is why I wrote to the Minister in the first place!  Jilly Tyler also knows perfectly well and so should Hekia Parata, that a Statutory Manager was appointed specifically to deal with "personnel matters" and that the appointment of the Statutory Manager was a direct result of the incompetence and dishonesty of the Board of Trustees!

When I complained about this insulting response from Jilly Tyler of the Ministry of Education to the Minister, Hekia Parata, I received this equally ridiculous response, which shows that the Ministry is seriously dysfunctional and the Minister is seriously incompetent - this matter is clearly a breach of natural justice, it clearly involves a conspiracy to lie about the original false allegation, which has now been compounded by the further defamatory and untrue allegation regarding the documentation regarding the sacking of the former groundsman Mr R and the correspondence between Mr R and the former Principal, which was handed to me by another concerned parent, and the continuation of the lies and the bullying from the Board and staff at the South End school.  Here's the totally inadequate response from the Minister: 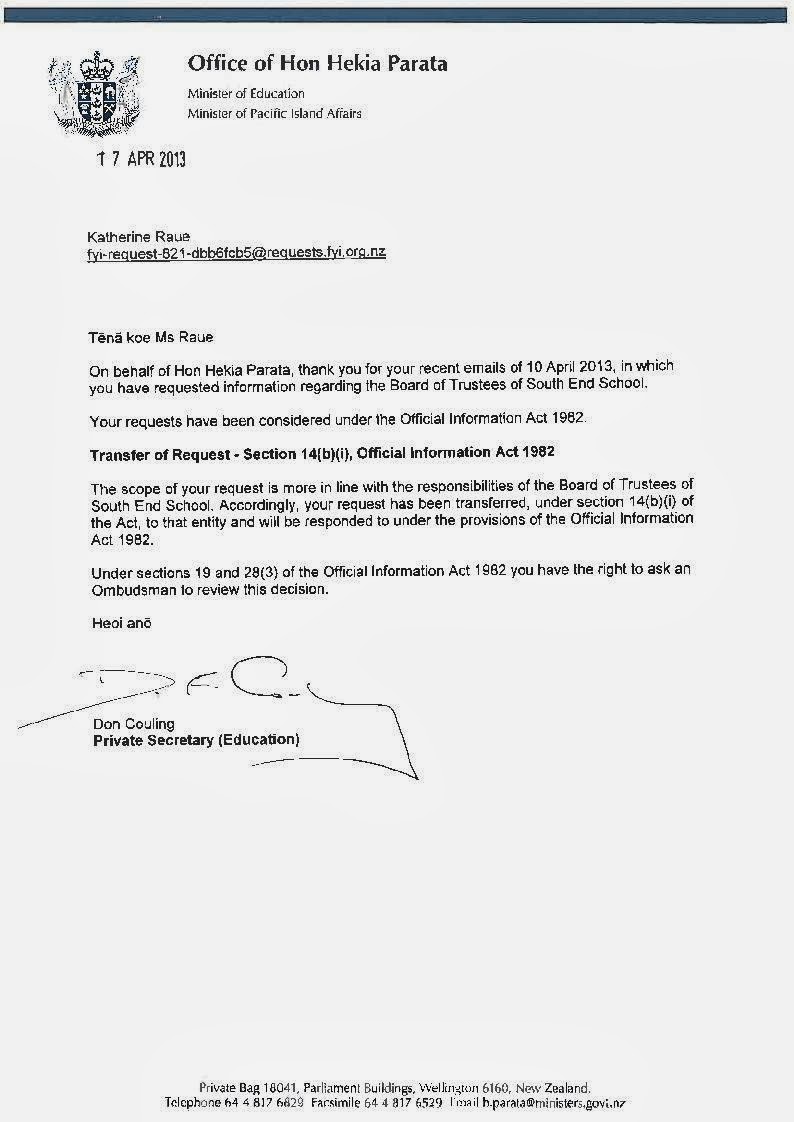 There's been no response whatsoever from the Board - as Parata well knows!

Labour MP Chris Hipkins was asked to present a petition to parliament regarding the matter - here's his response - cunningly referring to the matter as "the manner in which you were dismissed from the school - blatantly ignoring the REST of the problem!  And how it's not just me - the former groundsman was dismissed in the exact same incompetent and unlawful manner and it's not just the dismissals - it's the unlawful BULLYING - and the blatant and ongoing DISHONESTY and attempts to PERVERT THE COURSE OF JUSTICE - and the fact that this matter directly involves some of the most vulnerable children in New Zealand!  Wairarapa regularly has over TWICE the national rate of suicide in a country with some of the highest rates in the world and while the mainstream media are fond of reporting all sorts of happy clappy school garden 'stories' as 'news' they refuse to report on THIS matter because it inconveniently exposes the truth about our so called community leaders and representatives and exposes the fact that the Emperors have no clothes and are masquerading - if a simple matter like this is beyond the scope of their abilities, they need to STEP DOWN:

Transparency in New Zealand are documenting this outrageous abuse of taxpayers money - spent corruptly covering up gross incompetence and a pack of slanderous LIES!  Nothing but a great big gravy train!  The Emperor has no clothes and Hekia Parata and Chris Hipkins and others have NO integrity!  No wonder New Zealand has such a disgraceful record of child abuse and child mortality!

Here's why the Ombudsmen's Office is snowed under and not dealing with complaints - they need to just stop covering up corruption, because it's obvious that this matter could have been sorted out at the FIRST complaint I made back in 2009 and that the only reason it is NOT being dealt with is because of the level of blatant corruption and incompetence funded by the taxpayers of New Zealand and the lack of any accountability. 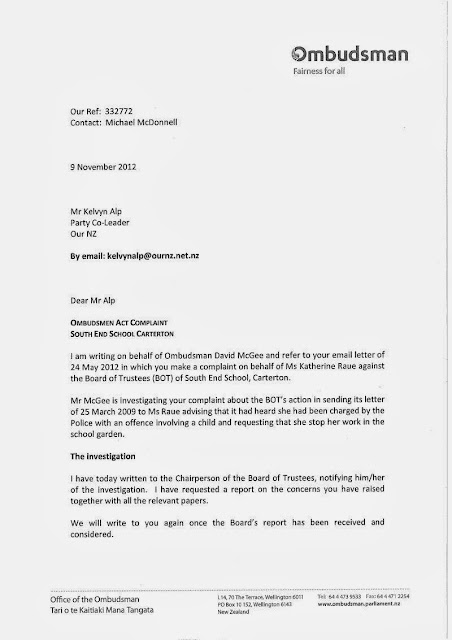 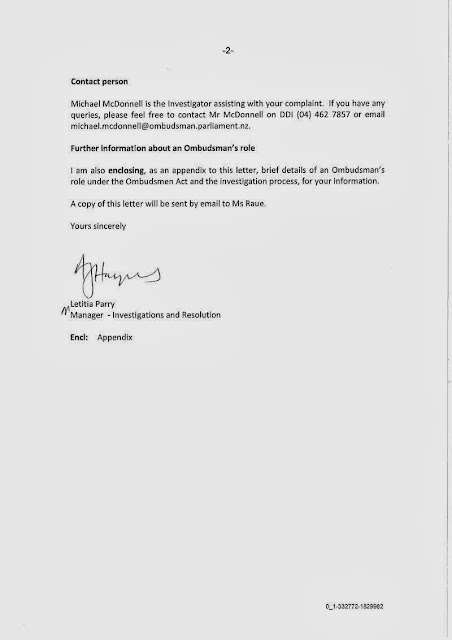 Corrupt local Police officers lied to the Board of Trustees and it's time everyone involved admitted it and put it right!  I will be filing action in the Court within the next two weeks regarding this matter and every parent and every taxpayer in New Zealand should be outraged and sickened at this blatant ongoing corruption!
Posted by Transparency in New Zealand, Kiwileaks. at Sunday, November 24, 2013