Financial Reports, Community Gardens: Beyer resigned for covering this up.

These are the financial reports of the Carterton Community Gardens.  It can be seen that there was the April Fool audit in April, then in May there was a payment of $6000 cash from this account, which lawyer Ken Daniels relates to the grant from the Tindall Foundation.  Then note that over $5000 of income is accounted for as "Miscellaneous", in June, August and September  these were the payments from the accounts of the other groups referred to in the documents below.

The Minutes of the Carterton Community Centre show that money was stolen from several bank accounts, several different organisations which held no liability for the personal grievance whatsoever.  That's fraud.  There is further information about these transactions on these sites and it is indisputable evidence of fraud, incompetence and corruption.  Georgina Beyer was forced to resign from parliament for her part in it.

More evidence of the book keeping regarding this matter: 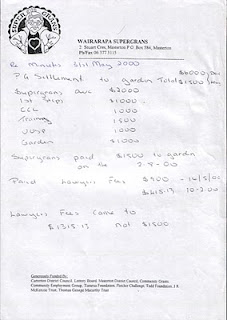 This was apparently a regular occurrence: 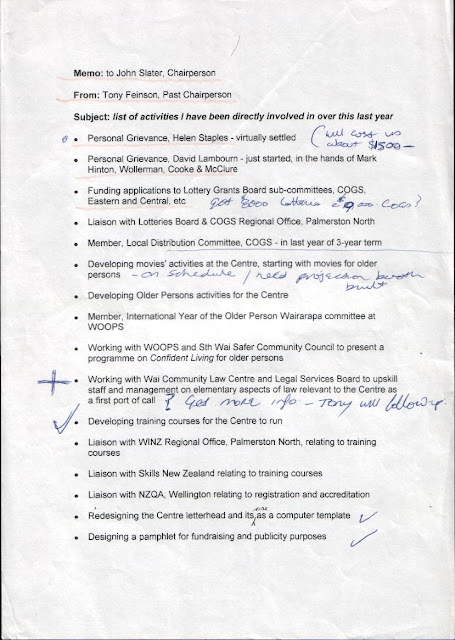 Neither of these matters went anywhere near the Employment Tribunal, the committee just decided to pay them, after holding secret meetings.  Tony Feinson, Chairperson, punched me in the face in the office of the Carterton Community Centre and he and a small group of people changed the locks and took over the Centre illegally.  At a public meeting on 18th April 2001, on this site, a motion was passed that the affairs of the Centre were to be audited.  The group refused to appoint an auditor or to forward the information to the auditor mentioned in the minutes of one of their meetings, R G Thompson.

And all this is what Georgina Beyer corruptly tried to cover up.  Beyer had to resign from parliament in disgrace and has never been able to get a job since - or hold one down for longer than six weeks or something (in the case of the recent stint at Michael Hill).

Posted by Transparency in New Zealand, Kiwileaks. at Tuesday, June 01, 2010