Here's the story of lying local prostitute Rachel Betteridge of Masterton, who made false complaints to the police, that I had sent her "over sixty offensive text messages".

I never sent Rachel Betteridge any offensive messages - Rachel Betteridge is a liar.  She and her husband sent me several seriously offensive and threatening messages, saying things like "You need a bullet", "watch your back", false accusations that I sexually abused my own daughter, and other filth.

Below is Betteridge's Brief of Evidence, used in the prosecution of me over her false and malicious allegations, in which she dishonestly claims "I did not reply to any of the messages", and the signed statements of two Justices of the Peace, and Betteridge's own father, in evidence that she did, and that she did therefore commit perjury, deliberately.

Corrupt local Police lied in Court, and committed perjury, when the prosecutor claimed to have tried to obtain information from Vodafone about the messages, and the several long phone calls to me from Betteridge around the same time.  Vodafone confirmed in writing that the police never even contacted them about the matter, never even requested any information.  Police wasted time and tax payer's money pursuing a corrupt prosecution.  There was never ever any evidence of Betteridge's lies, it does not exist, the claims are lies, like the lies in the letter from the South End School.  Lies spread by the police, Gary McPhee, and disgraced ex MP Georgina Beyer the Liar.  I never rang Betteridge or sent her any offensive messages, the police know perfectly well I didn't, and pursued the corrupt prosecution deliberately, despite knowing it was corrupt and an abuse of power, abuse of the Court process, and a blatant attempt to pervert the course of justice!  - Which is why I was acquitted!

Two Justices of the Peace would have convicted Betteridge, if they had been sitting in the Masterton Court, all the evidence proves that Betteridge is a nasty malicious, lying prostitute (she worked at Mermaid Bar in Wellington, and is now a "self employed" prostitute,) if the police had bothered to charge her when I showed them this evidence.

Betteridge showed the police NO evidence whatsoever in support of her lies against me - because none whatsoever ever existed, because Betteridge is a liar who made it up and the police know that, which is why they refused to contact Vodafone and request the evidence!

The transcript of the evidence, and the judgements will be up soon, watch this space for more evidence of police corruption and conspiracy between Court Registry officer Liz Harpleton and corrupt police prosecutor Gary Wilson and his mates to pervert the course of justice in the Masterton Court.

Here's Betteridge's Brief of Evidence, here's a handwritten statement from her father, Colin Allomes, and the statements from the Justices of the Peace: 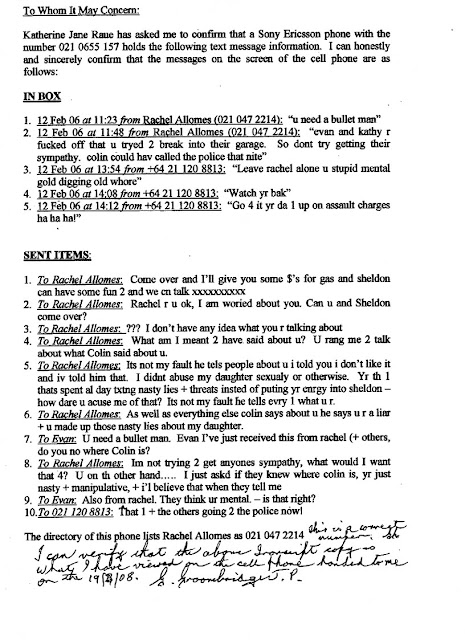 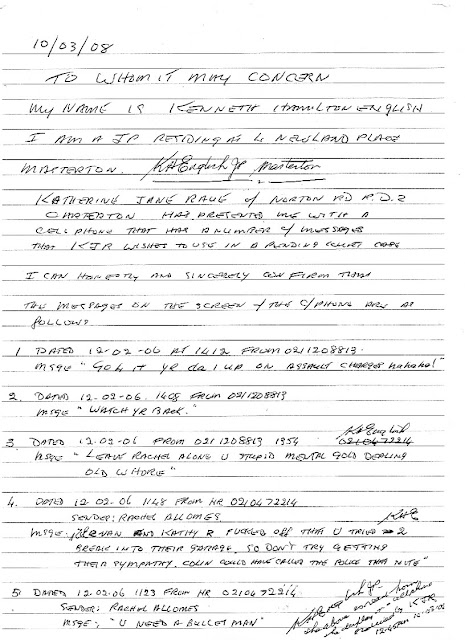 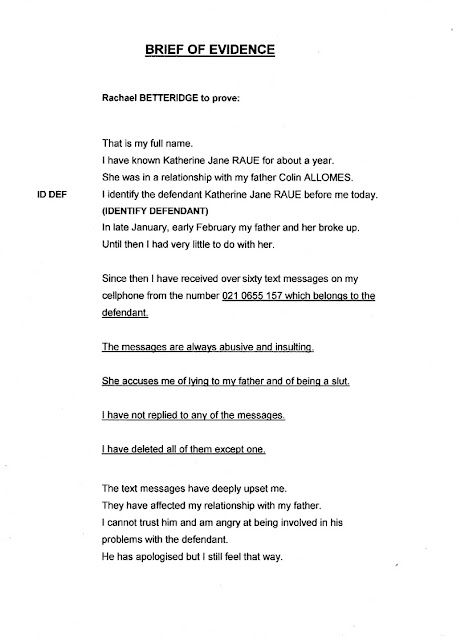 I filed a private prosecution against Betteridge in the Masterton Court.  Corrupt lawyer Jock Blathwayt of Wollerman Cooke and McClure conspired with Court staff to have it struck out in the face of this EVIDENCE, "for want of prosecution".  Click on this link to see how blatantly obstructive and corrupt Court staff commonly deal with applications from people like me, Vince Siemer, and others who seek justice in the New Zealand Courts.

And as for Betteridge's lies about how her father had apologised to her - read her father's statement to the Court for yourself! 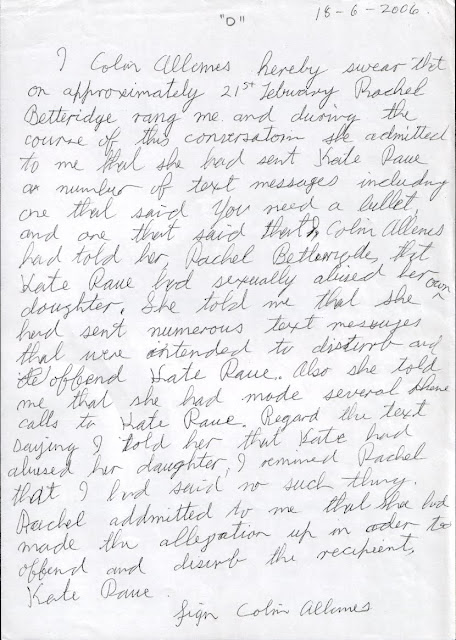 Posted by Transparency in New Zealand, Kiwileaks. at Thursday, June 10, 2010